Holiday Retail Sales Off to a Roaring Start | Business| Economy and finance news from a German perspective | DW | 29.11.2004

The start of the Christmas shopping season in Germany has left retailers optimistic about an increase in profits after last year's disappointing results. A boost in Sunday shopping seems to be the cause. 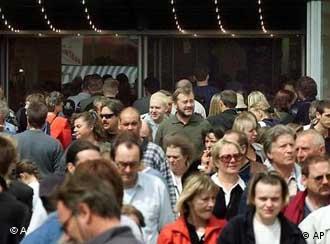 Shopping streets, like this one in Berlin, were full over the weekend

"Very satisfactory" is how Hubertus Pellengahr, a spokesman for the German Retailers Association, described the start of this year's Christmas shopping season, which officially opened over the weekend.

Adding to the thus-far positive outcome is the growth of a recent trend in Germany: Sunday shopping. Traditionally, shopping on Sundays was tightly regulated and prohibitted except in a few rare cases. Now, however, an increasing number of stores are opening their doors on the day of rest.

Many simply allow shoppers through their doors to browse for what they might wish to buy on another day of the week. The Swedish furniture chain Ikea, for example, has advertised with the "look only" principle in the hopes that customers will turn out on Sundays when they have the time and come back to spend money during the work week. Car dealerships have started operating on the same notion that comparison buyers want more time before they fork over the money.

But increasing numbers of stores have also opened for full-fledged consumption. Retailers in Berlin, Dresden, Potsdam and Bonn, among other cities, have begun opening on Sundays in an attempt to boast the shopping spirit before the end of the year. The community council in each of the cities allows for four Sunday shopping days per year, as long as none of them are in December.

"This was the initial spark for the Christmas sales season," Pellengahr said referring to store openings on Sunday, Nov. 28, which in Germany marks the first Advent.

The retail association is reckoning with an increase of some 1.3 percent in November and December, up to around €70 billion total sales, compared to the same period a year earlier. 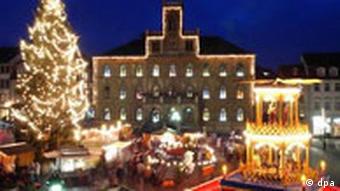 Despite the positive Christmas season outlook, however, the retailers were sticking to their full-year prognosis for an overall decrease in sales of 0.5 percent. Their hope is that strong Christmas sales will make up for extreme weakness in the October figures, which were down between 1.1 and 1.2 percent from last year.

Over the weekend, sales increases were seen in many areas compared to last year, but above all in the purchase of decorative Christmas items, the association said.

"The mood in the retail branch is lightening up," Pellengahr said. "Germans seem to have gotten in the mood for buying just in time for Christmas."

According to association polls, the increase in demand began in the middle of November. The industry even hopes to move the entire sales volume into the black by the end of November. In addition, this year's shopping season is longer than last year's by two full selling days, Pellengahr noted.

The retail association speaker said customers should not count on meeting the same wave of price-slashing sales and rebates that swept the stores last year. He said he assumed retailers learned from their mistake last year, when buyers kept their money in their pockets and waited for prices to drop.

Online shopping is the only bright spot in what is likely to be another bad Christmas for the retail industry. (Nov. 22, 2004)

Germany's highest court decided on Wednesday that the country's strict shopping hours are in line with the Constitution. (June 9, 2004)