Helen Seeney has been with the Deutsche Welle since 1987 and working with Inside Europe since 1990. She was born in Australia but lived in England for five years when she was young. 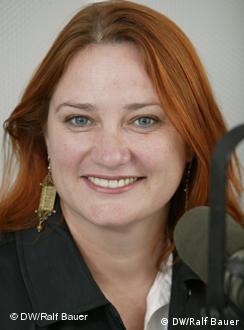 "I guess I don't sound terribly Aussie on the air", she says. "But there's a good reason for that. When I arrived in England in the 1960's from Australia, the kids at school used to tease me all the time because of my Aussie accent. It used to drive me nuts so the accent had to go ! Unfortunately, when I got went back to Australia in 1975, I sounded so posh that I got teased again for being a Pom! I just couldn't win."

After doing her Bachelor of Arts in history and then a Postgraduate Degree in Library Science in her homestate of Queensland, she finally decided journalism was for her and went back for a degree in journalism. "I knew I was on the right track when I won a Journalism Award for the Queensland Division of The Institution of Engineers in Australia. You see, I didn't know a thing about engineering, but I knew I could write!"

Helen loves the challenge each week of putting together a one hour sound rich show about Europe. "It's great fun dealing with the reporting team as well as having the opportunity to interview people who are actually making decisions about Europe's future."

She's always been an avid traveller and can never quite decide where to go next on holidays. Since arriving in Gemany, eastern Europe has held a particular attraction for her.

Explore the topical issues facing the continent with Inside Europe.