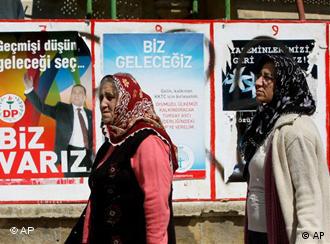 A strong showing by nationalists could complicate fragile reunification talks

The right-wing National Unity Party (UBP) had around 44 percent of the vote, according to provisional results released by the Turkish Cypriot administration on Sunday, April 19.

Talat's allies, the center-left Republican Turkish Party (CTP), were in second place with just over 29 percent of the vote.

The Turkish Republic of Northern Cyprus (TRNC) is only recognized by Ankara.

About 160,000 people were eligible to vote in Sunday's election. Election officials estimated turnout at 81.3 percent.

The Turkish press said that up to 100,000 voters are settlers from the Turkish mainland with TRNC papers.

A setback for reunification?

In the run-up to the vote, campaigning focused on the economy and reunification talks, with voters growing skeptical of President Talat's policy of reconciliation with Greek Cypriots.

Talat will remain the chief negotiator for the Turkish Cypriots in the talks with Cyprus President Demetris Christofias, but the strong showing by nationalists is likely to weaken his bargaining position. 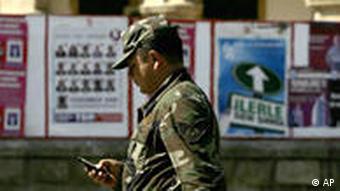 The aim of the current talks is to reunite the island as a bizonal federation. The UBP, however, says it wants a rethink of the process.

"We will continue to support negotiations," said UBP leader Dervis Eroglu. "No one should say we are against them. We will put forward our views and discuss them within the framework of Turkey's foreign policy on Cyprus."

In an earlier interview with Turkey's Zaman newspaper, Eroglu was quoted as saying: "Everything will be easier if it is universally accepted that we (Turkish Cypriots) are a nation and that we have a state."

The last attempt at a negotiated solution to the Cypriot problem collapsed five years ago when Turkish Cypriots voted in favor of a UN settlement plan which was then rejected by Greek Cypriot voters.