Happy pork chops? A new label for humane animal treatment | Germany| News and in-depth reporting from Berlin and beyond | DW | 29.10.2012

The humane treatment of animals, fair prices for farmers and clear information for consumers: Germany's animal rights activists want to introduce a new label to help ensure all three of those goals. 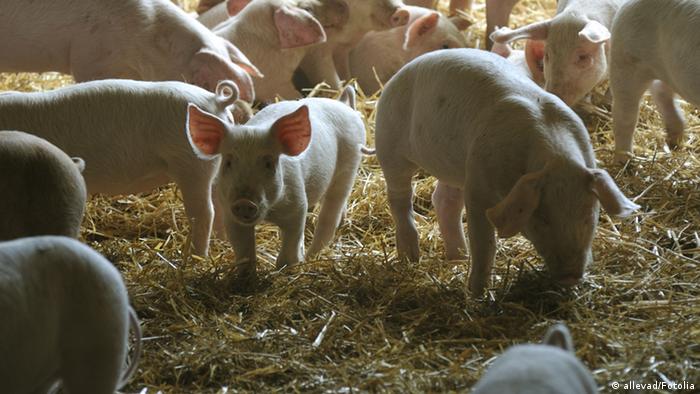 Organic food is en vogue, but its market share is still small. In the case of meat it's less than one percent. And "organic" does not necessarily mean the animals are being raised in a species-appropriate manner. This is to change, however, with a new label set to be introduced in Germany in January 2013 – indicating in two different levels to which extent the animals have been raised in accordance with animal protection guidelines.

The animals will have to be kept and raised significantly better than the laws currently prescribe, explains Thomas Schröder, president of Deutscher Tierschutzbund, Germany's largest animal protection organization.

"The animals will have more room and more space to move," he told Deutsche Welle, citing an example from the poultry industry: "Imagine a shower tub. On one square meter, you have 24 chickens. To qualify for the first level of the new label, it will have to be just under half of that," Schröder said.

While this was still much too little space, Schröder believes it will still give the animals more ways to move around and live in their natural hierarchy. "That will reduce aggression among the animals. The farmers will no longer have to cut their birds' beeks." If a farmer wants to qualify for the next level of the new label, however, he will have to provide the animals will even more space, notes Schröder. 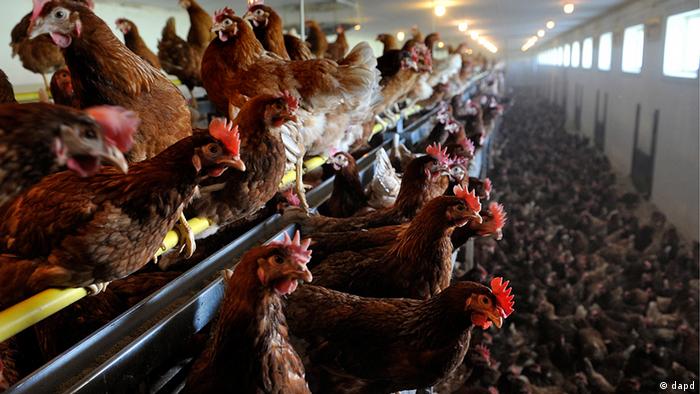 Poultry farmers need to raise some 700,000 animals a year to be profitable

So far, 27 poultry and 20 hog farms have applied to get the new label. The goal is to get five million animals from the poultry industry annually and some 20,000 pigs be raised in accordance with the label's requirements.

That sounds like it's a lot, but it is in fact very little, explained Helmut Born, General Secretary of the German Farmers Association. "We produce around 1.2 Million hogs in Germany each week. For that we need a wider approach."

This approach is already being worked on: In spring 2013, the association wants to present a concept on how to improve the living conditions for animals. The plan here is not to specifically draw attention to the meat in shops and supermarkets.

In future, farmers are supposed to get better support if they want to make the move toward a more animal-friendly way of raising their livestock. "We will support the farmer who will change the way he raises his animals, who for instance will no longer castrate his piglets without anesthetics," Born said. Pigs would also not get their tails cut off as is now common practice so they don't hurt themselves in their pens.

Competing with the market 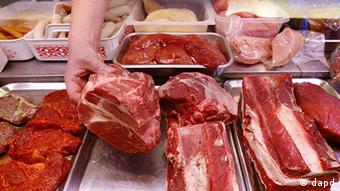 For Schröder, however, this approach is bound to fail. Individual changes will not change the entire system, he argues, and it is a move that could even backfire. "If a farmer decides not to cut off the tail but still keeps his pigs in the same old styes, it might even be worse for them than before," he explained.

Farmers' representative Born does not think that the plan for the new label is a bad idea per se, but he is not convinced that it will work on the market. "We are not alone in the world; we're dealing with open and globalized markets – especially meat and milk are being traded on a global scale," he said.

Many consumers are saying they'd spend more money for animals kept in a species-appropriate way but in the end they still end up buying their meat at a budget supermarket. Similar failed concepts in the past, have proven this, Born added.

The president of the German animal protection association believes the plan to introduce the labels would set an example. According to him it is not only the animals that are suffering under the current system – but also the farmers. "A poultry farmer can only survive nowadays if he has about 74,000 animals. That means over the course of a year some 700,000 animals because they only spend some 30 to 35 days in the coop." The profit margins under such circumstances are minimal, not only in the case of poultry. Per pig, a farmer only earns some six to eight euros. Basically what it takes would be to cut down on our meat consumption, Schröder.believes. And once we did eat meat, we'd have to pay more money for it to ensure the proper treatment and raising of the animals, he said.

But, of course, Schröder is also aware that stock breeding cannot be changed from one day to the next. He is convinced, however, that the success of the label would quickly get other farmers to join. Much will depend on how credible the label becomes.

"As long as the packaging still suggests that meat was raised in conditions that these animals have never even seen, this won't work." He also insisted that it is important to take the globalization of the business into account. "In the long run, we'll have to rethink out meat consumption and solve the question of how to feed the global population. That means: thinking about the bigger picture, but taking the first steps locally, here in Germany.

Meat industry lobbyists are opposing German government plans to combat drug-resistent animal germs that threaten humans. The changes may lead to major changes in the way farm animals are kept. (24.09.2012)

Germany's poultry industry is reeling from a health scare after an environmental organization found this week that half of all supermarket chickens in the country were contaminated with antibiotic-resistant bacteria. (11.01.2012)

Germany might be known for beer and bratwursts, but Berlin is starting a new culinary trend with “Vöners” and Sun Day Vegan burgers. (19.08.2011)