Happiness is … Love and Vacation

Valentine's Day is the day of love. If a new study is right, Germans should be their happiest then on Wednesday -- in addition to during their holidays. 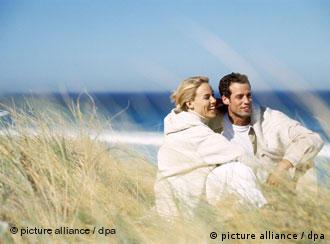 For most Germans, it doesn't get any better than this

There is no shortage of stereotypes about Europeans. The romantic French immediately pop to mind, as do the witty English and their dry sense of humor. Italians and Spaniards share the top place for being most fiery, and the Germans? These Teutonic people are best known for their seriousness and hard work, not though for their happy disposition.

But a new study presented this week showed that more than two-thirds of Germans tend to be happy. There is a hitch, though. Of those surveyed, 84 percent said they especially experienced happy moments when they were in love or on vacation. While the love aspect may have to be left up to fate, it's certainly a good thing that German employees have an average of six weeks paid annual vacation. That would make anyone happy.

The polling institute Allensbach surveyed over 1,700 men and women between the ages of 16 and 69 for the magazine emotion. It found that mostly women, young people or the better educated are most happy.

But if a gloomy day comes along, over half of Germans will pep up their spirits by listening to music, seeing their partner or meeting up with friends.

It also appears that Germans believe the old saying that every man is the architect of his own fortune. Almost two-thirds of those surveyed said they believed they could in part influence their own happiness.

Sex and money will not make you happy

Anyone who thinks sex is the key to happiness is just high on oxytocin. The Allensbach study showed that sex in fact does not make people happy. Only every third German said a satisfied sex life played a role in their happiness. The same was true for professional success. 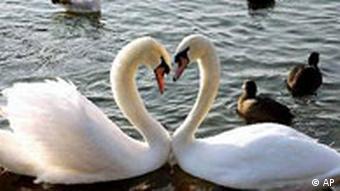 And the old saying that money can't buy you happiness was once again proven in the study: only 20 percent of those surveyed believe that a lot of money could make them happy.

Trend researcher Matthias Horx said he believed Germans were "happiness sourpusses" compared to other nations. Horx said an increasing number of Germans were breaking out of the typical pessimistic way of thinking and trying to work on their happiness. But too many Germans were still too passive and place too much emphasis on security in order to believe in self-made happiness, Horx said.

"Overcoming fear is not our thing," Horx said. "Germans may be relatively content, but they still think that the world is going downhill."

Can a celebrity be happy in Germany?

So what does your typical happy German look like? They believe predominantly in their own personal success (71 percent), like to take responsibility (68 percent) and have a lot of interests (68 percent). They're surrounded by longtime friends and acquaintances and seldom have the feeling that others are making more out of their lives. 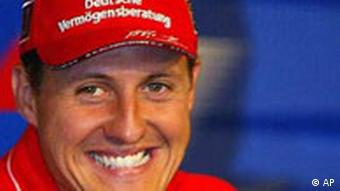 Michael Schumacher: the face of a happy German man

You'd think then that the country's chancellor Angela Merkel would be on top of the world. She may be, but only five percent of her nation think she is happy.

So who does the average German consider the happiest VIP in the population? Most voted for sevenfold Formula One race car driver Michael Schumacher and former tennis star Steffi Graf. Both, by the way, don't live in Germany.

Germany is certainly facing serious problems, but it's also important not to forget to laugh once in a while. Read up on a selection on recent articles about funny events in Germany. (09.02.2007)

Nobody ever questions the German sense for personal hygiene. But maybe somebody should, especially after a group of German teenagers, hooked on smelling like spring flowers, got an entire fire brigade busy. (09.02.2007)

A German bank has decided to do away with the stiff-shirt mentality in the workplace, at least linguistically. From now on, Teambank, the buddy-buddy bank, is going with first names and the informal form of address. (24.01.2007)