The Hamburg Wadden Sea National Park has been granted world heritage status by UNESCO, putting it on par with such wonders as the Grand Canyon, the Pyramids of Giza and the Cologne Cathedral. 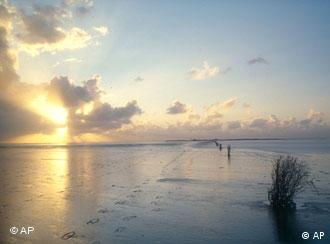 The UNESCO listing won't affect plans to deepen the Elbe

The decision came after the UNESCO committee reviewed a request by Hamburg authorities to grant the national park world heritage status and ensure its future protection.

The Hamburg Wadden Sea National Park consists of sand, mixed mudflats, shallow creeks, islands, channels and saltmarshes. Situated close to the mouth of the Elbe River, it represents an estuary system supporting some 10,000 species including seal, bird and fish.

The Hamburg park is part of the much larger Wadden Sea National Park, which extends into the German states of Lower Saxony and Schleswig-Holstein, as well as the Netherlands. Those parts of the park were awarded heritage status in 2009.

Hamburg did not apply for Heritage status for its portion of the park at that time over fears by authorities in the city-state that the award could prevent them from carrying out plans to deepen the Elbe. The deadlock was broken when UNESCO recently gave its assurances it would tolerate an expansion of shipping lanes along the river.

On Saturday, UNESCO agreed that German beech forests located in the states of Mecklenberg-Pomerania, Brandenburg, Thuringia and Hesse should be declared World Heritage Sites.

The German forests have been added to a listing for 10 similar beech forests in Slovakia and Ukraine, which have been on the World Heritage list since 2007.

On Saturday too, UNESCO agreed to include the Fagus factory, built between 1911 and 1925 in the central German town of Alfeld, as a World Heritage Site, recognizing it as "a landmark in the development of modern architecture and industrial design."

For 100 years the Fagus Factory has been the production site for model feet. Now the United Nations has recognized the massive factory in central Germany as a landmark architectural masterpiece. (26.06.2011)

Five beech forests in Germany have been declared United Nations World Heritage Sites. The areas have been included in a listing for similar ancient forests in Eastern Europe. (25.06.2011)

Thirteen languages in Germany are struggling to survive, UNESCO warns

Germany's regional dialects and languages have fewer and fewer speakers, according to UNESCO. On Thursday they released a list of 13 languages spoken in Germany that they say are at risk of disappearing. (17.02.2011)