A French court has found the main defendants in the 1999 Mont Blanc tunnel disaster trial guilty of manslaughter and sentenced a Belgian driver whose truck caused the deadly blaze to a four-month suspended jail term. 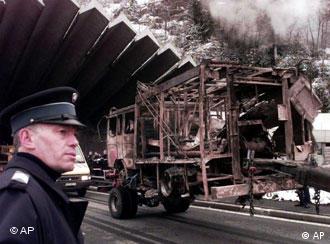 The blaze in the Mont Blanc tunnel killed 39 people

Gilbert Degrave, the Belgian driver whose truck sparked the deadly March 1999 inferno that killed 39 people, was given a four-month suspended jail term, below the six months suspended sentence prosecutors had demanded. 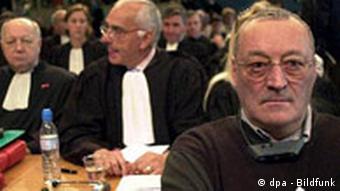 Four firms and a dozen individuals have been on trial in the French Alpine town of Bonneville, charged with involuntary manslaughter for the blaze in the Mont Blanc tunnel which took over 53 hours to extinguish.

Remy Chardon, former president of the French tunnel concession-holder ATMB, was given a two-year suspended jail term and a 15,000-euro ($18,000 ) fine, Michel Charlet, mayor of the nearby town of Chamonix, got a six-month suspended term and a 1,500-euro fine and Gerard Roncoli, the former French head of tunnel security, received a six-month jail term.

One of Europe's worst disasters

The blaze in the 11-kilometer (6.8-mile) link between France and Italy under western Europe's tallest mountain, was one of the continent's worst ever road disasters and led to new safety norms inside Alpine tunnels.

In three months of hearings that ended in April, the court was told that blunders, neglected procedures and failed coordination between the French and Italian authorities aggravated the catastrophe and cost many lives.

Gutted wreckages of vehicles inside the Mount Blanc tunnel

Driving a cargo of flour and margarine, Degrave saw fire and smoke emerging from his vehicle half-way through the tunnel, prompting him to stop and escape on foot. The fire spread to the traffic backed up behind, engulfing 24 goods vehicles, nine cars and a motorcycle in an inferno which raged for more than two days and reached temperatures of 1,000 degrees Celsius (1832 F). Most of the dead suffocated from the poisonous smoke.

The technical report into the fire established that the nearest smoke detector was out of order and the radio frequencies used inside the tunnel were flawed.

Two individuals were acquitted, as was the Swedish vehicle manufacturer Volvo. The court had heard there was no evidence of a design fault in Degrave's Volvo truck.

"The punishments are balanced. There are no scapegoats. Every level of security bears some responsibility," said Alain Jakubowicz, lawyer for the Association for the Defense of Victims' Families.

"Obviously we will never get our dead back. They will never return. But life goes on, and this verdict allows us to look to the future," said Andre Denis, the association's president. 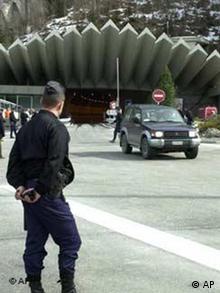 Heavy traffic was reduced sharply after the tunnel's re-opening in 2002, with strict rules imposed on the minimum distance between goods vehicles.

However in the last two months the number of lorries using the tunnel has more than tripled following a fire which killed two people in the Frejus tunnel under the Alps to the south.

The Frejus tunnel should reopen by the end of August.

The spectacular suicide by plane in front of Berlin's Reichstag of a man wanted for the murder of his wife has led transportation officials to tighten flying restrictions around the German capital. (July 25, 2005)

One Man's Treasure, a Fireman's Trash

German firemen destroyed a young driver's first car after they mistook it for scrap and used it to practice rescue techniques. (May 20, 2005)