Green party votes against Munich Olympics | Germany | News and in-depth reporting from Berlin and beyond | DW | 21.11.2010

In spite of its leadership campaigning in favor of the Munich 2018 Winter Olympic bid, delegates decided to go another direction at the Green party conference. 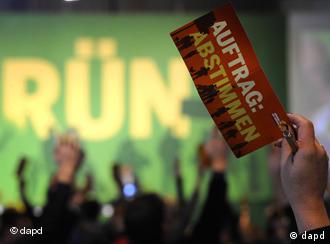 The Green party voted against the interests of their leaders

The Green party withdrew its support for the 2018 Munich Winter Olympics bid on Sunday after a vote at the party conference in Freiburg. The vote came despite campaigning in favor of the bid by newly re-elected party co-leader Claudia Roth.

Roth was forced to step down from the board for Munich's Olympic bid after the vote was passed by a slim majority during the conference. She had said she hoped that by participating that the Green party could ensure that the games were "as green as possible."

The move came as a result of environmental and fiscal concerns, the party said, citing the plan as "ecologically anything but exemplary."

Foreign Minister Guido Westerwelle said that the Olympic bid was an opportunity to gain prestige for Germany adding that withdrawing support was "a serious mistake."

The decision by the Green party comes not long after the German Nature Conservation (DNR) withdrew its own support for Munich, in September, saying that holding the Games in Garmisch-Partenkirchen, with its narrow valleys and ecologically significant areas would be irresponsible.

"Munich 2018 now stands for the destruction of nature and landscape in the highlands during climate change, a lack of transparency and soaring costs," DNR spokesman Sebastian Schönauer said in a press release.

Also in the running for 2018 are Annecy, France, and Pyeongchang, South Korea, with the winner to be announced by the International Olympic Committee next July.

Green party leaders Claudia Roth and Cem Oezdemir have been reelected as the party's joint leaders ahead of key regional elections in 2011. (20.11.2010)