Greek Cypriots Say ″No″ to Reunification | Europe| News and current affairs from around the continent | DW | 24.04.2004

Greek Cypriots Say "No" to Reunification

Greek Cypriots on Saturday voted overwhelmingly against reunification with Turkish Cypriots, sounding the death knell for a UN-backed peace plan to end a 30-year division of the island. 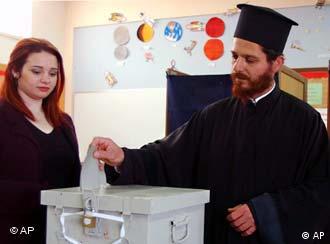 Television exit polls forecast that the Greek Cypriots voted against the U.N. blueprint in large numbers, while the Turkish Cypriots voted heavily in favor.

Greek and Turkish Cypriots were voting in separate referendums on whether to accept a peace plan drawn up by UN Secretary-General Kofi Anan in reuniting the island that has been divided for 30 years ever since Turkey invaded the north in the wake of a Greek Cypriot coup in an attempt to unite the island with Greece. A mined no-man's land, the "Green Line," which is policed by U.N. peacekeepers, separates the northern one-third of the island from the south.

Papadopoulos gets his way

Greek Cypriot leaders in particular objected to the fact that the blueprint restricts the rights of an estimated 200,000 refugees to return to their former homes in the north, while allowing more than 60,000 settlers from Turkey to remain on the island. 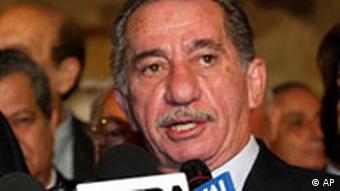 Greek Cypriot President Tassos Papadopoulos along with his nationalist allies has been accused of running a campaign playing on Greek Cypriot fears that Turkey and the Turkish Cypriots would fail to hand back nine percent of the island's territory and gradually withdraw 38,000 Turkish troops.

Earlier on Saturday Papdopoulos cast his vote and said, "Today's voting will determine the future of our country. Greek Cypriots and Turkish Cypriots deserve better days and I am sure these will come."

For his part, veteran Turkish Cypriot leader Rauf Denktash, who also vociferously opposed the peace plan in the face of widespread support for it among his own people, said that Cypriots didn't really know the 220-page document they were voting on.

Denktash criticized the international community for forcing the referendums on Cypriots. "This could not have been done in Europe because they are treated as civilzed people," he said. "We are Cypriots; we can be pushed around, kicked around and told what to do."

Many Turkish Cypriot ssupported the "yes" vote because they saw the plan as a path to greater prosperity and entry into the EU. Turkish Cyprus has been isolated for years. Legally, it can only trade with Turkey, the only country that recognizes it as a separate state.

The prospect of failure had already brought irritation to much of the international community. The United States, which has been campaigning to convince Cypriots to vote "yes," has accused the semi-governmental Cyprus Broadcasting Corporation (CBC) of restricting press coverage for the plan's proponents. Cypriot television aired a two-hour, prime-time interview with Papadopoulos, but U.S. diplomats claim CBC has stopped interviewing foreign officials.

European Union Enlargement Commissioner Günter Verheugen said he felt "cheated" by the Greek Cypriot government, which had always pushed hard for a reunified Cyprus to join the EU. He suggested that some Greek Cypriots opposed the plan for economic reasons, fearing that the north could become a rival tourist destination. Tourism is one of the south's most important industries. 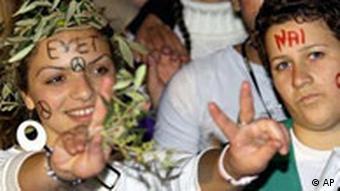 Turkish Cypriots overwhelmingly are in favor of the U.N. peace plan.

The standard of living is dramatically lower in the north. An international trade embargo has cut off the Turkish Cypriots politically, economically and culturally.

In a fresh blow to the Cyprus peace process, Greek Cypriot leader Tassos Papadopoulos has urged voters to reject a U.N. plan to reunify the island in a referendum later this month. (April 8, 2004)

"I personally feel that I have been cheated by the government of the Republic of Cyprus," Verheugen said in Strasbourg. (April 22, 2004)