Government sticks to plan for retirement age to increase to 67 | Germany | News and in-depth reporting from Berlin and beyond | DW | 17.11.2010

Government sticks to plan for retirement age to increase to 67

Beginning in 2012, the retirement age is set to increase gradually to 67. The government said on Wednesday the country is ready after a report from the labor ministry finds the job market is opening up for older workers. 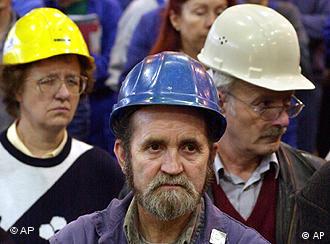 While France is only just coming to terms with the fact that workers will have to work longer to maintain the government's pension program, the German government decided years ago that the retirement age would begin increasing, one month at a time, from 2012 until it eventually increases from 65 to 67.

On Wednesday the government said it was sticking with that plan after Labor Minister Ursula von der Leyen presented a report showing improved employment opportunities for older workers.

The employment rate for those aged 60 to 65 is currently at 38 percent and has doubled in the last 10 years, von der Leyen said.

Economists cited in the daily Financial Times Deutschland argued this trend should continue. Martin Dietz from the Institute for Employment Research (IAB) told the paper that an employment rate of 50 percent was possible for over-60 workers.

Oliver Stettes from the Cologne Institute for Economic Research (IW) said that the rate for those older workers would eventually be similar to that of other age groups.

One reason for the bright prospects for older workers, Stettes said, is that there are simply less young people entering the labor market and competing for jobs with those over the age of 60.

Von der Leyen shot down suggestions from the German Confederation of Trade Unions to increase required pension fund contributions from everyone and go back to retirement at 65.

"There are a lot of us babyboomers," von der Leyen said on German public television. "We are going to retire in large numbers, and the younger people, who are fewer, will have to work to support our retirement."

According to von der Leyen, it's only fair to the younger workers that everyone works longer.

The then-grand coalition government of Christian Democrats and Social Democrats agreed to the age increase in 2007, with the caveat that the labor market was periodically evaluated to ensure the feasibility of keeping workers over the age of 65 in the workforce.

After von der Leyen's latest report, the government said it would push forward with the 2012 date.

The controversial and unpopular pension reform plan has become official law in France, as President Nicolas Sarkozy claims victory and the opposition Socialists vow to repeal it. (10.11.2010)

The American Chamber of Commerce in Germany (AmCham Germany) says Germany needs more skilled workers to continue meeting the needs of US companies. (30.09.2010)

German think tank calls for employees to work until 70

A German think tank has caused a stir with a suggestion that the country's retirement age could eventually be lifted to 70. But the suggestion has been dismissed by campaigners who have concerns about any rise. (11.08.2010)