Goma airport, in the Democratic Republic of Congo, is being rebuilt after being half-buried by a volcano. Frank-Walter Steinmeier has become the first German foreign minister to visit. DW's Claus Stäcker reports. 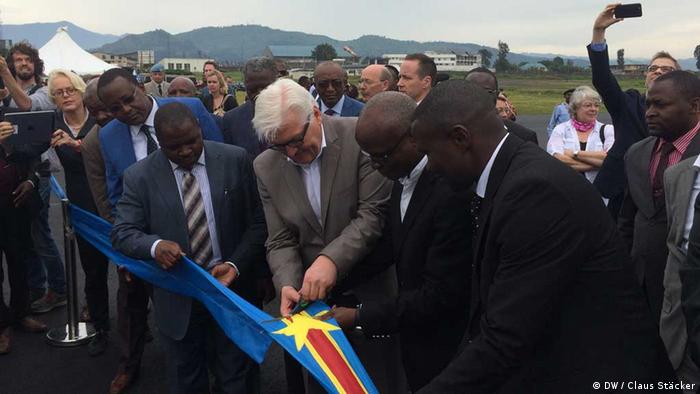 Blue and white marquees are set up alongside the runway in Goma. The local governor nearly had them taken down last minute, as he thought they didn't seem fit to receive the German foreign minister - the first to visit the city. But in the end, the tents stayed up for the runway's opening ceremony, which took less than an hour.

In front of his guests of honor, the governor sang the praises of the "great economic prospects that the hub between Congo, Rwanda and Uganda" would bring. His guest Frank-Walter Steinmeier also praised the airfield effusively as a "spot of hope for the people," who for decades have suffered war, a number of different military leaderships, and natural disasters.

Thirteen years ago, Mount Nyiragongo erupted near the airport and buried half of Goma under a layer of lava a meter thick. It shortened the runway by half, meaning that only small planes could use it. The wreckage of larger ones that attempted to land there anyway can be seen at the end of the landing strip. In 2009, financed by the German Foreign Office, work began to clear the lava and lengthen the runway. 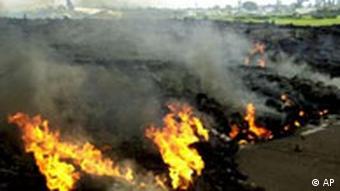 The volcano eruption in 2002 covered half the city in lava

It cost 14 million euros over the years. Construction had to be stopped occasionally, the last time in 2012, when rebels seized and sacked Goma. Now, after around six years of work, the German part of the project was finished. The only thing missing is another 500 meters and a layer of tarmac - DRC's own contribution. When that is complete, Goma will be able to receive larger planes again.

Half-finished runway a symbol of hope

A fitting allegory for Goma would be the phoenix. Peace has ruled for three years now and Goma, which has risen from the lava, has become a regular boomtown. Locals have made use of the igneous rock, turning it into walls to help build nearly every home. Part of the city's success can surely be attributed to Martin Kobler. As special representative for the United Nations Organization Stabilization Mission in the Democratic Republic of Congo (MONUSCO), he heads the UN's largest mission worldwide with 20,000 peacekeepers. The mission's base is at the airport.

In 2012, peacekeepers were forced to watch as the rebels' troops marched in and ransacked the city. Since Kobler took over the MONUSCO mission in July 2013, the blue berets and the DRC army have forced back the rebels. Next in line are the FDLR rebels, who once fled Rwanda. Only around 300 of them have laid down their weapons in line with an ultimatum in January, which means an estimated 1,500 remaining militants still have to be fought.

Nevertheless, Kobler put the cooperation with the DRC army "on ice" at the beginning of February. Two of the army's generals are on a list of suspected perpetrators of human rights abuses. As a UN commander, Kobler cannot and does not want to cooperate with them, meaning the Congo mission, which is supported by the African Union, has come to a halt. Witnesses report that parts of the official army are taking part in and profiting from road checkpoints with FDLR fighters.

Maybe President Joseph Kabila doesn't want to fight anymore. But that's something Kobler does not want to accept. The war against FDLR now depends more strongly on "political resolve" than earlier offensives, he admits, "but I am convinced that the political resolve is there." But they have to get a move on - the military operation "has been shelved for too long already."

Militarily, it would be relatively easy to force the FDLR fighters to their knees. But Kobler is a realist. He says that such a move would not automatically bring peace. He points to a map that highlights areas of natural resources, drug crops and troop positions in eastern Congo. Gold, coltan, tungsten, charcoal, and marijuana - each of the rebel militias control one of these resources. These are proper modern rebel knights. And the illegal products get into neighboring countries through Goma. 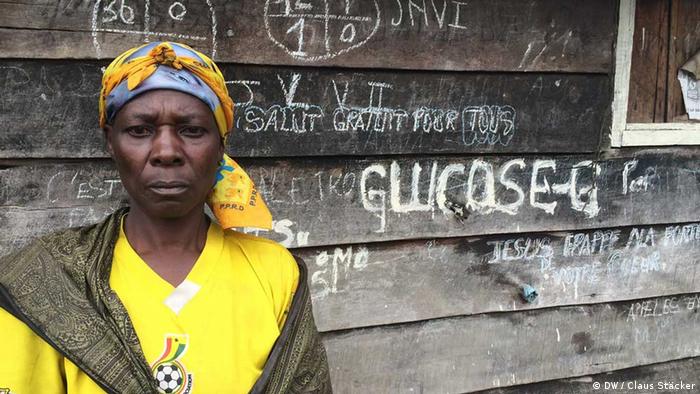 This is why Steinmeier, during his visit, made his case for a certification system for the minerals. "Illegal resources should be stopped from being mined and brought over the border, where they are sold on to the world market," he said. "We need to certify the natural resources."

The German Institute for Geosciences and Natural Resources (BGR) in Hanover has created an identification system to trace natural resources such as tin, tantalum and tungsten back to the source mine. The BGR is planning to open up a test lab in the region soon.

For the locals who do not benefit from the trade of resources on the black market, this seems like a very distant vision. Widows like the 56-year-old Bivaho Nsekerabanzi would be happy enough to see her five kids live in a peaceful society and have enough to eat. Bullet holes from 2012 are still visible on her self-made wooden house north of Goma. Nsekerabanzi's family was able to get to safety in time. And after spending a year in a refugee camp, the family was able to return home. But she doesn't trust the MONUSCO troops, who looked away back then. "Long lasting peace," she says, "can only be secured by Congolese security forces. Not the blue berets."

German Foreign Minister Frank-Walter Steinmeier was caught up in the Ukraine crisis on his latest African trip. However, he was keen to not let it distract him from diplomatic efforts in Kinshasa. (20.02.2015)

Leading German politicians have said they want Berlin to take on more responsibility internationally, including military missions. But Germany's allies are wondering if Berlin will come through when the chips are down. (26.02.2014)

Q&A with Frank-Walter Steinmeier in the DR Congo