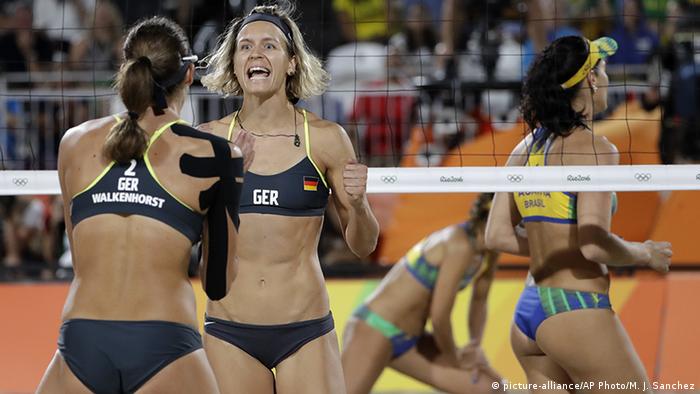 At a packed temporary stadium with a samba band, dancers and swirling wind, German destroyer Walkenhorst was devastating with the spike late Wednesday as the visitors took control of the first set.

She smashed yet another into the sand to go four points ahead with Ludwig converting on the first try as Germany won 21-18 in the final's first set.

In the second set, Germany raced to an 11-5 lead and then set up match points when the imposing Walkenhorst successfully jousted at the net.

Brazilian Barbara Seixas, under severe pressure, put her serve straight out, prompting a scream of delight from the celebrating German pair, who took the second set 21-14.

"The more pressure we had, the better we played," Walkenhorst said after the game. 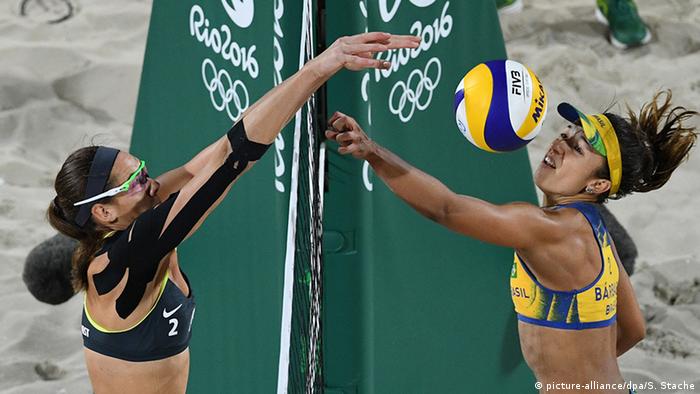 Walkenhorst (L) won the day over Seixas at the net

Germany's star gymnast Fabian Hambüchen won gold on the high bar ahead of Danell Levya of the US and Britain's Nile Wilson. It broke quite a German gymnastics drought: no gold medals since the 1996 Atlanta Games. (16.08.2016)

Two years after the 7-1 World Cup demolition that is one of the lowest points of their football history, Brazil have a chance for revenge on Germany after both men's sides won their semifinals on Wednesday. (17.08.2016)

Germany's Henri Junghänel has won gold in the men's 50m Rifle Prone after the 28-year-old delivered a nerveless performance in the final. It's the country's second shooting medal in as many days. (12.08.2016)