Global climate change: Data-driven answers to the biggest questions | World | Breaking news and perspectives from around the globe | DW | 26.11.2015 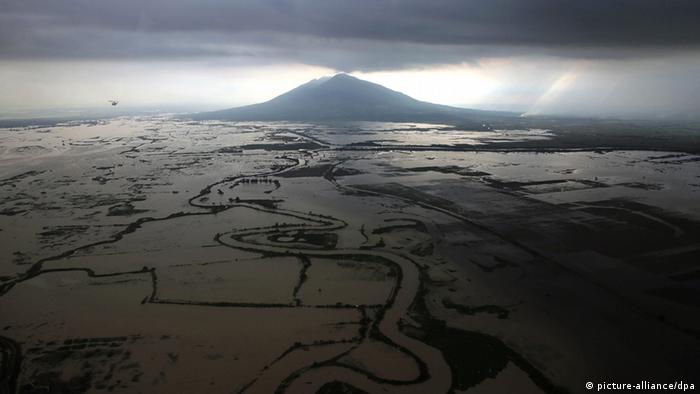 Aerial view of a massive flooding due to heavy rains brought by typhoon Koppu in central Luzon, Philippines, in October 2015. Extreme weather events are expected to happen more frequently as a result of climate Change.

With the United Nation's 2015 Paris Climate Conference soon to be underway, we wondered what our readers might want to know about it. So we looked up the most-googled search terms to get you prepared for the debates likely to take place around the summit.

So here we go:

Climate change is caused by humankind's increased emissions of greenhouse gases. Today, #link:http://climate.nasa.gov/evidence/:atmospheric CO2 levels# are higher than ever before in human history. [If you are on the side of climate change deniers and about to say that climate change is not manmade, please spare us that discussion and #link:http://www.bloomberg.com/graphics/2015-whats-warming-the-world/:let our colleagues from Bloomberg convince you].# 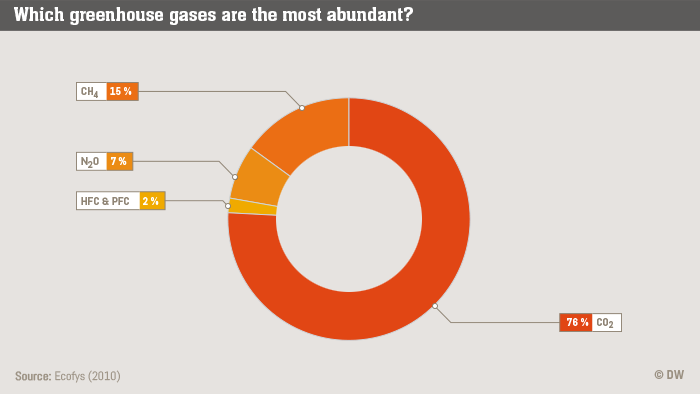 Taken together, the burning of three main fossil fuels - coal, natural gases and oil - accounts for 65 percent of greenhouse gas emissions; the remaining 35 percent are mainly derived from livestock and waste emitting methane and cutting down trees for logging or land use.

Breaking that down into sectors, you'd get a picture like this: 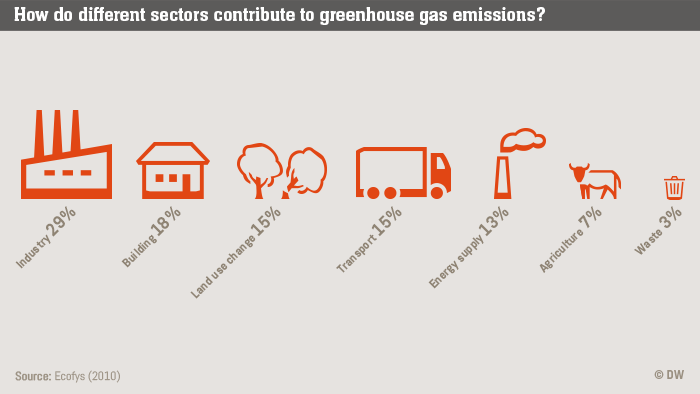 Countries around the world have different standards when it comes to environmental protection laws regarding industrial emissions. Taking a look at the biggest CO2 emitters, a list that shows the places with the #link:http://dw.com/p/1EdN8:worst air pollution.# 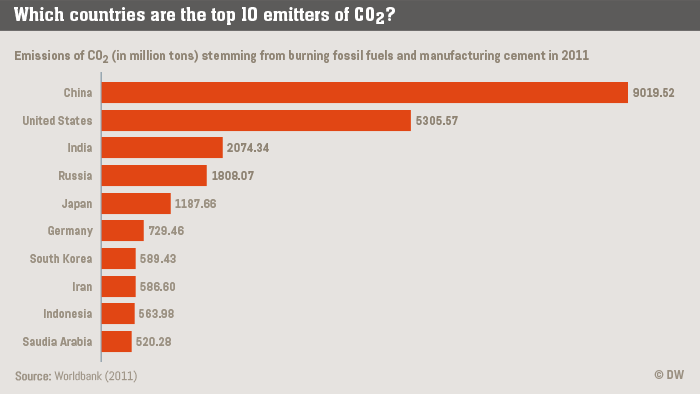 If we had included a category for Europe and Central Asia into that ranking then it would have overtaken the US. But not China. And isn't that mind-blowing: Big China emitted more CO2 in 2011 than all the European and Central Asian countries combined?! 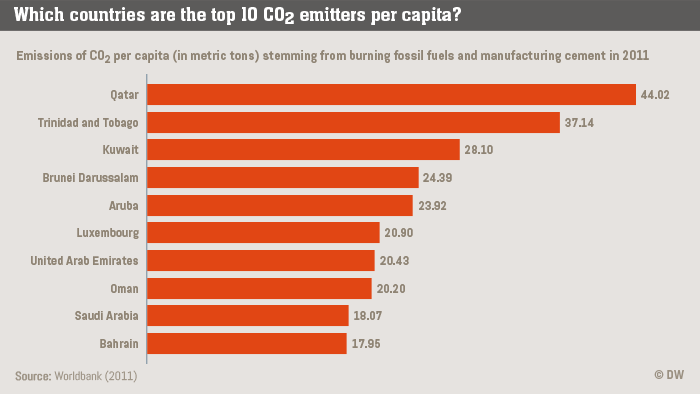 If your country is not included in the worst CO2 per capita emitters, then take a look at this map to find out how it compares: 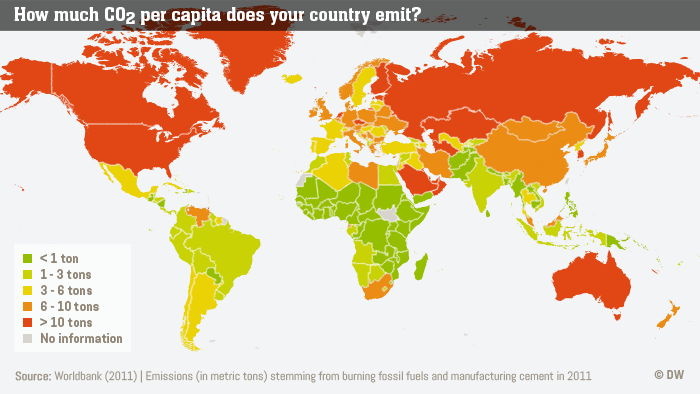 You might mock us for using data from 2011. We also find it unfortunate, but this is the most comprehensive and up-to-date data available on a global scale. However, little appears to have changed since then. Although, 2014 was the first year within four decades with #link:http://www.bbc.com/news/science-environment-31872460:global CO2 emissions stalling at 32 gigatonnes# instead of rising further.

If we continue to burn fossil fuels and cut down forests at the current rate, our planet will see increasingly bad effects. Some studies have even looked at the cities and sights we would lose.

Though predicting the future is a volatile business, climate physicists can estimate the likelihood of the effects of climate change. We are even seeing some of the effects right now:

Melting ice around the planet leads to rising sea levels that #link:http://sealevel.climatecentral.org/news/global-mapping-choices:flood low-lying coastal cities#. It becomes even more dire if the global mean temperature increases more than two degrees compared to that of the preindustrial age.

But it's not all about warming. In fact, climate change also alters the planet in other ways . Water cycles also get out of balance: in some places, like Indonesia, more #link:http://www.nature.com/nclimate/journal/v5/n6/full/nclimate2617.html:heavy rainfall is predicted#, whereas in others, like Colombia, people might be forced to survive with more extreme heat in the future.

The University of Notre Dame analyzed how vulnerable single countries are to climate change, also taking into account their preparedness. As part of the so-called #link:http://index.gain.org/:ND-Gain Index,# scientists #link:http://index.gain.org/about/methodology:assess# how climate change effects sectors like food, water, health, ecosystem services and infrastructure. It balances that with the country's adaptation capacity, the economy's willingness to make investments in adaptation and human sensitivity, taking into account the degree of development, social inequality and education. 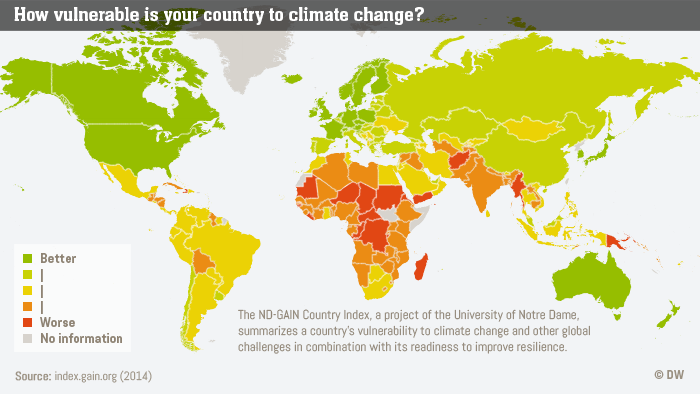 There are ways to lower vulnerability by preparing for future risks, though many of these options are expensive. Slowing or stopping climate change is often calculated as the cheapest option. The Intergovernmental Panel on Climate Change (IPCC) suggests a couple of #link:https://www.ipcc.ch/publications_and_data/ar4/syr/en/spms4.html:options and strategies for adaptation#, such as expanded rainwater harvesting, increased crop variety and adjustment of infrastructure for transportation and energy to higher temperatures.

For all developing countries, the cost of such adaptation measures could reach $250-$500 billion per year by 2050, the UNEP #link:http://www.unep.org/newscentre/Default.aspx?DocumentID=26788&ArticleID=34788:estimates.#

But even if the money was granted, that might not be enough. Although humans have adapted to changes throughout history, this time adaptation alone is not the solution. It aims at living with a problem that could make the planet uninhabitable, instead of solving it.

The most important change that needs to be made to actually mitigate climate change is to stop the use of fossil fuels. In fact, there are some countries that are doing fairly well with that. 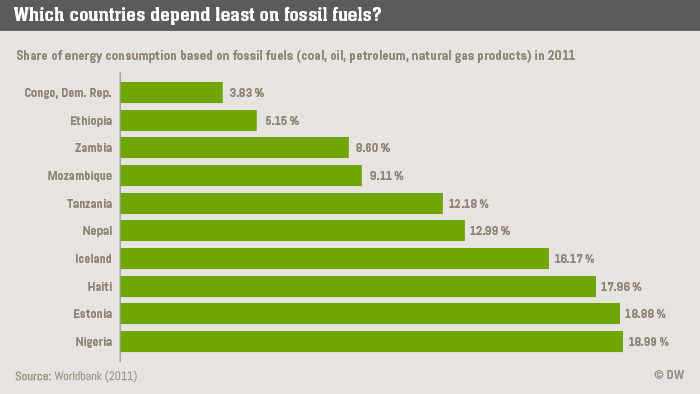 Nigeria - with 173 million inhabitants, the largest African country - is also among those 10 countries with the smallest share of fossil fuel consumption. So even if a country is home to many people, it's possible to turn away from fossil fuels. Although Nigeria is among the #link:http://www.eia.gov/beta/international/analysis.cfm?iso=NGA:largest oil producers# in Africa, the country itself only derives 13 percent of its energy from oil. The major share of energy in the country - 80 percent - comes from traditional biomass and waste. Germany, in contrast, which is recognized widely for its energy transition, known as the "Energiewende", derives only 25 percent from renewable energies and aims at achieving #link:http://www.forbes.com/sites/jamesconca/2015/07/02/germanys-energy-transition-breaks-the-energiewende-paradox/:35 percent by 2030.#

If you are wondering how your country compares, take a look at this map. 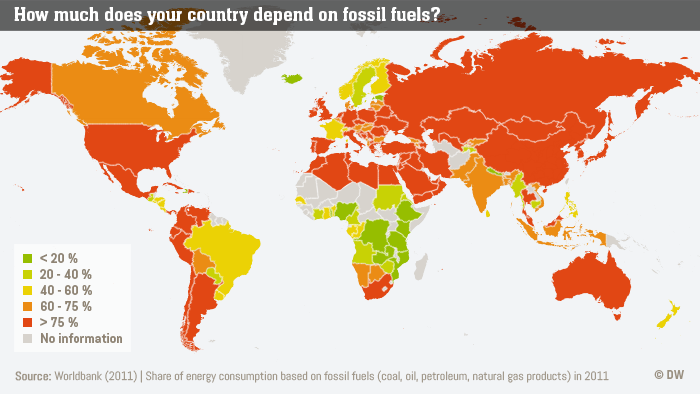 While world leaders are once again meeting in Paris to confirm how important it is to take action against climate change, their actual economic deeds tell a different story: they are still massively subsidizing the use of fossil fuels.

In many countries, energy companies profit because they don't have to pay full taxes on various parts of the extraction or distribution process. Apart from these direct subsidies, fossil fuels are also indirectly supported by governments that are rarely willing to calculate future environmental problems induced by pipeline spills, drilling, mining and burning that add up to heavy societal costs. Calculating potential damage as part of the energy prices would raise the subsidized cost by a factor of 10.

In total, the International Energy Agency #link:http://www.worldenergyoutlook.org/media/weowebsite/2015/WEO2015_Factsheets.pdf:estimates# that fossil fuel subsidies were around $490 billion in 2014. But there's also slight progress: it would have been $610 billion without the reforms put in place in 2009.

So in the end, it's unquestionable as to what causes climate change. The actual question that needs discussion: are we willing to translate our commitment to tackle climate change into actual mitigation efforts?

Nasa: Climate Change - How to we know?