Despite taking the lead, Borussia Mönchengladbach drew 1-1 in their opening game of the 2014/15 Europa League after a disappointing performance in the second half. 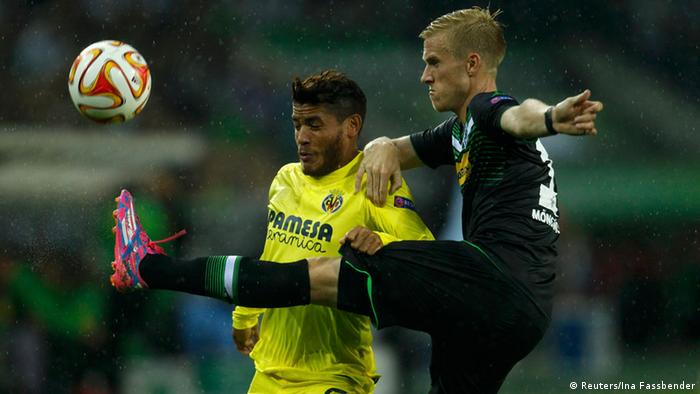 After a season away, Borussia Mönchengladbach returned to the Europa League with a 1-1 draw against Spanish side Villarreal. Patrick Herrmann put the hosts ahead, before substitute Ikechukwu Uche equalized for Villarreal.

After a strong defensive opening, Yann Sommer made a smart save to deny Denis Cheryshev. That proved even more important when moments later, a long ball forward fell to Branimir Hrgota. The Swede, in the starting lineup for Raffael, couldn't find a way through but Andre Hahn's replacement, Patrick Herrmann, could and he fired into the top corner.

Shortly before the break, Hrgota had a glorious chance to make it two-nil, but the striker hesitated inside the box and his dinked effort went wide of the far post. 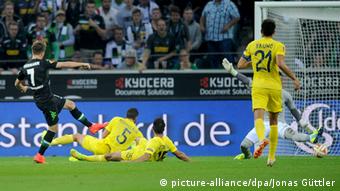 Herrmann proved an effective change for Hahn in the first half

The football continued in the second half, and so did Gladbach's lack of composure in the final third. Shortly before the hour mark, Cheryshev blazed over just outside the six-yard box after a slick counterattack.

With space opening up behind Gladbach's defense, substitute Ikechukwu Uche came on for a remarkable cameo. With his first touch, the Nigerian striker scored the equalizer for the Spanish visitors but picked up an injury with goalkeeper Sommer in the process and had to be brought off after less than a minute.

Having equalized, Villarreal looked the brighter of the two sides as the Gladbach suddenly struggled to put a pass together. In fact, their only notable chance of the second half was when Dominguez flicked Kruse's free kick over the bar.

Spurred on by their home fans, Gladbach searched for a late winner. The Slovak referee Ivan Kruzliak looked as though he was going to give a penalty in the 90th minute after calls for a handball, but, after consulting with his flagging linesman, he decided against it.

Attention moves from Champions League to Europa League on Thursday, as Europe's second major competition welcomes the group stages. The two German clubs want to overturn a miserable record in the past few years. (18.09.2014)