Gladbach bow out, Wolves ease through

Gladbach's European dream is over for another season after they lost 3-2 in a second leg tie against Sevilla made harder by Granit Xhaka's red card. Wolfsburg marched on after they played out a goalless draw in Lisbon. 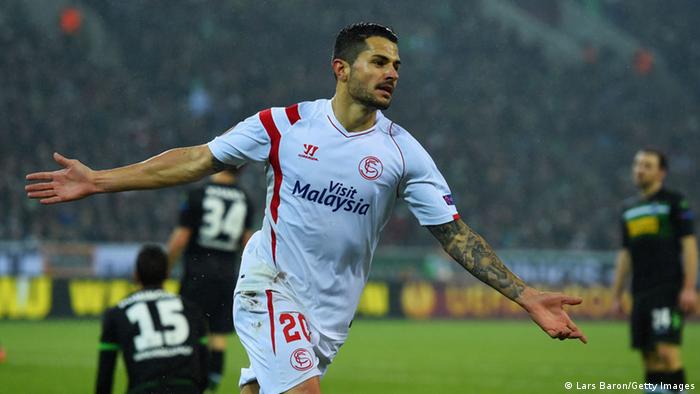 They say even the best-laid plans go to waste. After a week of preparation for Gladbach's Europa League round of 32 second-leg match against Sevilla, home coach Lucien Favre could have ripped up his briefing notes inside the first eight minutes on Thursday.

On a night when both teams forgot how to defend, Gladbach were always chasing the game and although they twice fought back to equalize, the second half sending-off of Granit Xhaka left them with too much to do.

Leading 1-0 from the first leg in Spain, defending champions Sevilla scored an early opener and were always ahead in the tie, adding two more goals to secure a 4-2 aggregate victory and safe passage into the last 16.

The first half floodgates were opened when Ever Banega drove forward from the Sevilla right and fed Aleix Vidal, who fired in a low cross which Gladbach defender Martin Stranzl could only divert into his own net under pressure from Colombian striker Carlos Bacca.

If Favre might have favored a tight game, he instead found himself throwing caution to the wind as the Foals chased the three goals they then needed to progress.

They got one back on 19 minutes when Max Kruse rolled a ball into Granit Xhaka, who back-heeled a pass to Patrick Herrmann before collecting the return and rifling home the game's equalizer.

The mountain got bigger for Gladbach on 26 minutes, however, when Vitolo ran half the length of the pitch and blasted a left-footed shot which Yann Sommer could only palm into the top left corner. 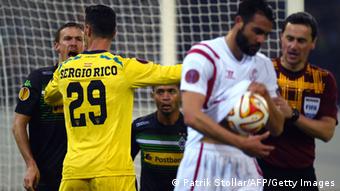 But, in an end-to-end first half, Raffael won a challenge on the edge of the Sevilla box on 29 minutes and the ball looped to an unmarked Thorgan Hazard, who chested it down and buried a shot beneath Sergio Rico to restore Gladbach's two-goal deficit.

During the goalmouth scuffle that followed, Vicente Iborra was booked for Sevilla for tucking the match ball under his shirt in an effort to prevent Gladbach forcing a quick restart.

The second half continued where the breathless first had left off.

On the hour mark, Max Kruse grazed the Sevilla bar from a wide angle after finding himself in space inside the box. A minute later Rico turned a fizzing shot from Xhaka around his left-hand post as Gladbach sought a route back into the tie.

With the home side throwing men forward, Aleix Vidal was allowed a lonely run on the Gladbach goal on 63 minutes, but Sommer stayed on his feet to keep the match level.

Kruse then had a penalty claim turned down on 67 minutes before Xhaka was shown his second yellow card of the night by Croatian referee Marijo Strahonja, for pressing his studs into the back of Iborra's calf.

With 10 minutes to go and with only 10 men on the pitch, Gladbach were effectively knocked out of the competition when Vitolo raced through a hole in the home defense to slide in Sevilla's third of the night and seal a 4-2 aggregate win.

Wolfsburg cruise through after tame draw in Lisbon

In one of the later games on Thursday, Wolfsburg secured a last 16 place in European competition for only the second time in their history after drawing 0-0 with a limp Sporting Lisbon in Portugal. 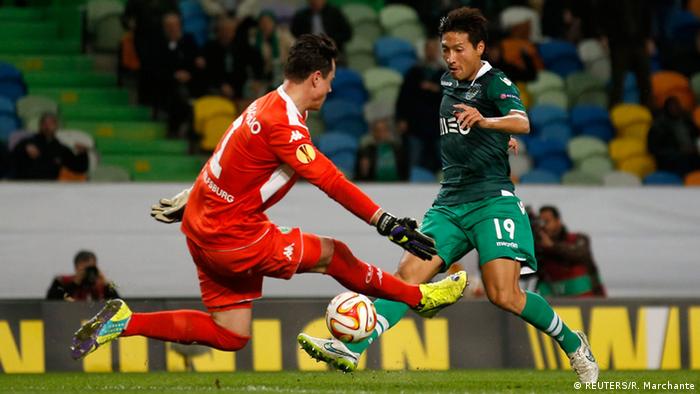 The Wolves had scored 17 goals in six games in 2015, with Bas Dost claiming 11 of them. The reborn Dutchman was rarely employed on Thursday, however, as a cautious Wolfsburg coach Dieter Hecking set up his team to protect the 2-0 lead earned in the home leg, rather than try to extend it.

And the whole blocks of empty seats visible inside the Estadio Jose Alvalade suggested the Sporting fans had given up on the tie long before Wolfsburg closed out the goalless draw.

A drab first half was momentarily brought to life in the 35thminute when Japanese striker Junya Tanaka fired a shot across the Wolves goal. Two minutes later William Carvalho tested Diego Benaglio from distance and from the resulting corner, a goalbound Tobias Figueiredo effort was cleared off the line. Tanaka and Adrien Silva then had shots blocked before Joao Mario blazed over a busy attacking spell for the home side.

Sporting, however, were guilty of a lack of urgency as the tie slipped away from them in the second half.

On 64 minutes André Carrillo appeared to want to walk the ball into the net and ended up blazing it high over the bar. Tanaka also delayed too long after Benaglio saved his point blank shot with only ten minutes left on the clock.

At the other end Dost was denied what looked to be a certain penalty for Wolfsburg in the 83rdminute when he was tripped from behind by Jonathan Silva as he prepared to shoot.

Ultimately it was little more than his own red-hot scoring streak which suffered as Wolfsburg rode out the rest of the game untroubled, to the delight of their 1,500 traveling fans.

Wolfsburg will now be hoping they can go on to equal their best Europa League campaign of 2009/10, when they reached the quarterfinals.

In the pick of the night's other ties, a miserable Liverpool season in Europe was completed with a 5-4 loss on penalties to Besitkas in Istanbul, after both legs ended 1-0 in the home sides' favor.

Liverpool's city rivals Everton secured a 7-2 aggregate win over Young Boys to ensure Britain has a representative in the last 16 draw on Friday, after Inter Milan beat Celtic 1-0 for a 4-3 win overall and Tottenham crashed out to Fiorentina.

There was more trouble involving Feyenoord supporters on Thursday after a hail of missiles forced the players off the pitch for ten minutes in its home leg with AS Roma, with the away side leading 1-0 and the hosts down to 10 men. Roma eventually won the match 2-1 and the tie 3-2, a week after Feyenoord fans ran riot in Rome.