How can I tell him I want more? Why doesn't she like me? What is a condom? Generations of confused German teenagers have turned to Dr. Sommer for honesty -- and explicit photos. 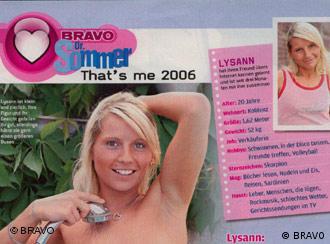 Sandra, 16, looks up coyly from the pages of Bravo, wearing a black choker and nothing else. Boyfriend Elias, 18, grins from the opposite page, also in his natural state.

"Tell me, why do you love each other?" reads the headline. And the young couple tells why -- and exactly how.

Sell this in America, and risk prison time for child pornography.

But in Germany, this is nothing tawdry.

It's the country's most popular teenage magazine, and it turns 50 on Saturday.

Sandra and Elias' graphic spread is in the same issue as a free sheet of fake tattoos, a feature about Harry Potter, and an exclusive report on Tokio Hotel, the German boy band currently making girls swoon.

It highlights a basic cultural divide between Germany and many other countries -- of how openly sex is discussed, especially among youth.

"It is not pornography," says Bravo's deputy editor, Alex Gernandt. "It deals with naked people, but in a very sensitive way. We try to portray young people to tell readers, 'You are not too fat, not too thin. You are OK the way you are.'

"There are a lot less teenage pregnancies in Germany in comparison to the United Kingdom or the US, and I think Bravo has its share in that success," Gernandt said. 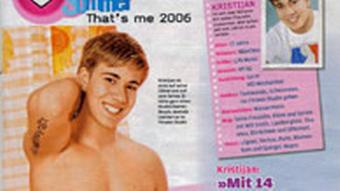 "I was seduced at 14," Kristijan says

When it began in 1969, "Dr. Sommer really broke taboos, and it was really spectacular to do something like that," said von Arx, who has been writing the column for three years. "It's not that spectacular anymore. People are used to it. Everybody knows it."

Each weekly issue of Bravo now features photos of two teenagers, generally between 16 and 20, in the nude, with interviews about their bodies and experiences.

Anyone under 18, like Sandra, must have his or her parents' permission to appear.

They are paid 400 euros (a little more than $500) to pose, and many report the experience is a self-esteem boost, von Arx said.

Weekly letters range from "My boyfriend is once again interested in his former girlfriend" to "Everybody's had sex, only I haven't." Sample answer: "Nowhere does it say that youth have to have sex by a certain time… Talk to your boyfriend about it. Tell him how you feel."

"You can be sexy here"

Bravo's Web site even features explicit petting and positions photo galleries that wouldn't last a day in other countries.

The magazine publishes its eastern European editions with little to no nudity. But in Germany, even teachers and religious leaders seem to welcome the column. Von Arx has spoken in schools and was even invited as a youth expert to a big evangelical Christian conference last year.

Gisela Gille, chairman of Germany's Society for the Health of Women, said Bravo plays an important role in the sexual education of Germany's 12- to 15-year-olds, particularly the lesser educated. Gille said the advice satisfies basic curiosities, but that many teenagers read Bravo only for a short time and stop when they become more experienced.

Tanja Reddig, a 17-year-old Berlin student, said that she read Dr. Sommer when she was 12 and 13 and didn't see what the fuss was over the nudity.

"You can be sexy here and you don't get any problems," she said. "In America, they can't show bodies. They must hide something. Some teenagers don't want to ask their parents things, so they could write a letter to Dr. Sommer." 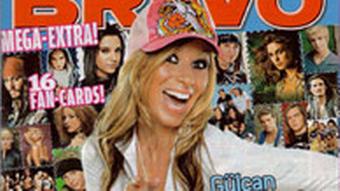 Dr. Sommer began during the sexual revolution of 1969. Bravo was then a strictly entertainment magazine, but its young readers nonetheless kept writing letters about love and sex.

So editors figured such a column would increase their readership, according to Antje Pfeffer of the Berlin-based Archive of Youth Culture (Archiv der Jugendkulturen), which has published a book about Bravo's 50 year history.

"Dr. Sommer immediately was greeted as too open," Pfeffer said.

Some parents glued the Dr. Sommer pages together so their teenagers couldn't read the column, others banned it from the house. Some schools confiscated it, and in communist East Germany, many clamored for smuggled copies.

But from the start, the column took its mission quite seriously. The first Dr. Sommer, Martin Goldstein, recalled in the Berlin archive's book that he and his team of social workers, psychologists, sociologists, political scientists, family counselors and parents would spend hours going through letters:

I have fallen in love with a sweet young boy. If he would kiss me, I would be happy for my entire life. How can I get him to do it? I see him almost every day and I already know his name. But don't tell me that I should talk to him. Janne, 14

The boys in our village seem to have no interest in us, no matter what we do. We do not know how we can get their attention. Ina, Renate, Anne and Beate, 15 and 16

The team tried to respond in an encouraging, non-judgemental way. But often, they wondered whether the teenagers had anyone else they could confide in. They were shocked at how many letters were sent in -- sometimes 3,000 to 5,000 a month.

"We believed it was because young people wanted to be listened to," Goldstein recalled.

Soon, they were dealing with much thornier issues, such as a 1988 letter titled "My mum's boyfriend sexually abused me."

By the end of the 1980s, Dr. Sommer had become more mainstream, and answers seemed freer. For instance, Nicola, 15, wrote in with the basic question, "How do I show him that I want more?"

The answer: Tell him what you want. Or, just push his hand higher.

Von Arx says many of the letters have not changed much over the years. But recently she has seen more teenagers concerned that they won't get ahead in school because they are so distracted by lovesickness.

She is often asked if the column is even necessary anymore.

"People think our society is very sexualized, and naked bodies and sex are everywhere, and young people should know everything," she said. "But they don't know anything sometimes."

Germans Too Hot for Sex This Summer

One of the rarely discussed consequences of global warming is the catastrophic effect it may have on the sexual practices of northern Europeans. (Aug. 16, 2006)

Living up to its reputation now that the world's eyes are on its home country, German mass-circulation tabloid Bild has again found a way of connecting the World Cup to the physical act of love. (June 18, 2006)

A 27-year-old woman allegedly killing five of her children brings many to ask: How could this have been prevented? And why does the wide range of help for teenage moms and their kids in Germany still seem insufficient?

After a five-year break, the Californian band is back on tour, with a stop in Cologne on July 5. We look back on their turbulent band history.

The 39-year-old German rock star made headlines after he posted a video on social media in which he reports an antisemitic incident at a Leipzig hotel.