Germany′s Steinmeier Warns of Widening Middle East Conflict | News and current affairs from Germany and around the world | DW | 23.07.2006

German Foreign Minister Frank-Walter Steinmeier, one of a number of European diplomats currently in the Middle East, warned Saturday that "extremist" forces must be stopped from widening the current conflict. 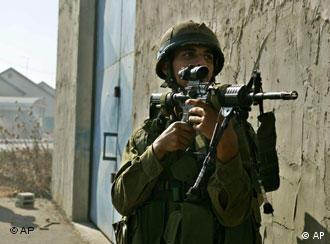 Israeli soldiers are fighting Hezbollah in Lebanon, a move which has angered Syria

Steinmeier told a joint news conference in Cairo with his Egyptian counterpart Ahmed Abul Gheit Saturday that a political solution was needed for the violence between Israel and Lebanon to stop "extremist forces" from broadening the conflict.

"We cannot allow extremist forces to define the agenda of the Middle East," Steinmeier said. "We must strive to stop extremist forces from wanting to broaden the scope of the conflict," he said.

"We are making all efforts to create the suitable conditions which will allow for a ceasefire, within a political framework aimed at reaching permanent stability in the region," Steinmeier said.

Israel launched its massive offensive on Lebanon after the Lebanese Shiite group Hezbollah captured two Israeli soldiers in a border region on July 12 with the aim of securing a prisoner exchange.

In 11 days, the conflict has killed more than 340 people in Lebanon, more than 30 in Israel, and forced upwards of half a million Lebanese to flee their homes.

But for his part Abul Gheit insisted that a prisoner swap should be part of these conditions and stressed the need for a ceasefire. "A ceasefire is a principal and essential demand which we must concentrate on," he said. "Reaching stability for a ceasefire must go hand in hand with certain procedures, including the swap."

Israel has around 10,000 Palestinian prisoners and an unknown number of Lebanese in its jails. Hezbollah, like Palestinian groups which snatched another soldier on June 25, have demanded a prisoner swap with Israel.

Germany and Russia are trying to help Israel secure the release of its soldiers in Lebanon and the Gaza Strip, the German newspaper Berliner Zeitung reported on Friday.

The newspaper said the German foreign intelligence service (BND) is trying to use its contacts within the two groups. The head of the BND, Ernst Uhrlau, in 2004 supervised a prisoner exchange between Israel and Hezbollah. 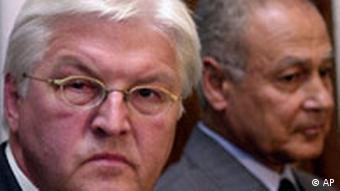 "The German government has in the past played a very constructive role in resolving hostage crises or the kidnapping of soldiers. It is time for Germany to do so again," Israeli foreign ministry spokesman Yigal Palmor said Thursday.

Steinmeier was just one of a number of top diplomats from Europe who planned to converge on Israel Sunday ahead of a visit by US Secretary of State Condoleezza Rice as world powers moved to try to end the Lebanon conflict.

The Europeans are trying to push the Jewish state into ending its massive blitz on Lebanon, which has killed more than 350 people in 12 days, most of them civilians, and destroyed key infrastructure across the country.

Washington, Israel's closest ally, continues to staunchly defend the Jewish state and argues that a ceasefire can only come as part of a wider diplomatic package involving the disarmament of the Lebanese Shiite Muslim Hezbollah. 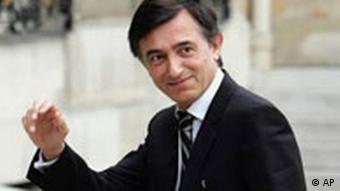 Douste-Blazy was due to meet Israeli Prime Minister Ehud Olmert later in the day, along with Foreign Minister Tzipi Livni, and Palestinian president Mahmud Abbas in the West Bank.

"I am convinced that a ceasefire is possible," Douste-Blazy said

Israel has rejected calls for an immediate ceasefire in its war against Hezbollah. "It's too early to talk about a ceasefire," Immigration Minister Zeev Boim said before a weekly cabinet meeting. "We first have to reach the goals which we set, to rout Hezbollah from southern Lebanon."

Olmert was also due to meet with German Foreign Minister Steinmeier.

Britain's junior foreign minister Kim Howells, due to meet Livni and Abbas on Sunday, was also likely to push Israel into easing its offensive that has also displaced more than a half million people and triggered warnings of a humanitarian catastrophe.

The European diplomatic efforts are unlikely to succeed until the United States changes its position and also presses for a cessation in hostilities.

Washington argues that a ceasefire can come only as part of a diplomatic package that sees the disarmament of Hezbollah, guarantees of Israeli security on its northern border and an end to Syrian and Iranian backing of Hezbollah.

Could Lebanon Crisis Lead to a New Trans-Atlantic Rift?

The Iraq war caused a diplomatic rift between the US and its allies in 'old Europe' and between European nations themselves that has only recently healed. Will the escalating situation in the Middle East cause another? (July 21, 2006)

Germany's minister responsible for development aid has been a lone voice calling for an immediate ceasefire in Lebanon. She deserves respect and could soon find top-level sympathizers, says DW's Peter Stützle. (July 21, 2006)

Israel Gears up for Massive Ground Assault as World Dithers

In what would be a major escalation in the current Middle East conflict, Israel is massing land forces on the border with Lebanon in a move seen as a prelude to invasion. (July 22, 2006)