Frank-Walter Steinmeier, a close ally of outgoing chancellor Schröder, is set to be Germany's new foreign minister. Not much is known about the "silent star in Schröder's team," who largely acted behind the scenes. 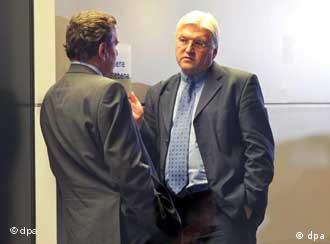 Steinmeier, right, is now set to step out of Schröder's shadow

For someone who has preferred a low profile to the political spotlight, Frank-Walter Steinmeier will have to get used to playing one of the most visible roles in German politics.

The 49-year-old, who is a close ally of Chancellor Gerhard Schröder and his chief of staff since 1999, was nominated this week to fill the key foreign ministry post in the new power-sharing cabinet of the Social Democrats and the conservatives.

The reaction to Steinmeier's nomination, expected by few, has caused some bewilderment in Germany.

"Who actually is Steinmeier?" ran a headline on Friday's Handelsblatt daily, reflecting the fact that the white-haired Steinmeier is a relative unknown to those outside of political circles.

Steinmeier is rumored to be friendly yet firm and a smooth behind-the-scenes operator. The newspaper Die Woche once described him as a "silent star of the Schröder team." 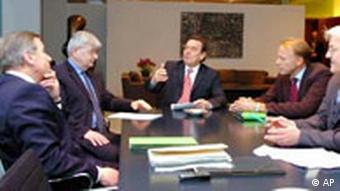 Steinmeier, extreme right, during a meeting of Schröder's cabinet

Indeed, he's been an indispensable aide to Schröder during the last seven years, both regarding foreign policy and domestic issues. He has earned a reputation as an efficient manager and tireless worker.

He was also valued as a reliable mediator in Schröder's cabinet when it came to sticky political issues, able to defuse spats and personal tensions.

That led the respected German weekly Die Zeit to dub Steinmeier "Dr. Flawless" and others to call him "Chancellor Whisperer" in a reference to Steinmeier's familiar presence to Schröder's left at high-ranking meetings and conferences, passing him slips of paper or murmuring words of advice into his ear.

Steinmeier's squeaky-clean record has also reputedly left the opposition at a loss to find anything negative about him.

"I find him really efficient and I think he's perfect for every post," Michael Glos, a top politician of the conservative Christian Social Union, told Deutsche Welle.

The son of a carpenter, Steinmeier was born in the western German town of Detmold on Jan. 5, 1946. He's married and has an eight-year-old daughter.

The law graduate has been a member of the Social Democratic Party for the last 29 years and at Schröder's side since the chancellor's days as premier of the state of Lower Saxony in the 1990s.

Head of the federal chancellery since July 1999, he has been closely involved in coordination with intelligence services. Steinmeier is said to be particularly interested in the Middle East as well as the international fight against terrorism.

He took part in daily briefings with Schröder and Foreign Minister Joschka Fischer in the aftermath of the Sept. 11 attacks and is said to have been Schröder's closest advisor in the run-up to his famous refusal to participate in the US-led war against Iraq.

Though Steinmeier is largely considered to have little direct foreign policy experience, his one memorable speech on foreign affairs does indicate that he might largely continue the course taken by Schröder.

At a meeting held at Berlin's Science and Politics Foundation last month, where he filled in for Schröder, Steinmeier championed the policy of seeking a more active role for Germany on the international stage, gradually taking on more responsibility after the reticence that followed World War Two.

However, the job of being Germany's face abroad won't be an easy one for Steinmeier. 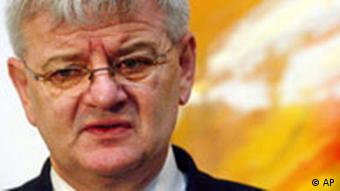 The expectations will be high as he attempts to fill in the large shoes of his predecessor, the highly popular and charismatic Joschka Fischer (photo).

And Steinmeier will also need plenty of diplomatic finesse and artful negotiation skills in handling ties with Washington. They were soured by the outgoing government's opposition to the Iraq war, although they have improved somewhat in the meantime.

The chancellor question has been answered -- now, Angela Merkel must build an effective coalition government. She already faces criticism from disgruntled conservatives and Social Democrats over the division of power. (Oct. 11, 2005)