According to statistics, unemployment is down in Germany and most people are satisfied with their jobs. But is the German work world really as rosy as it seems? 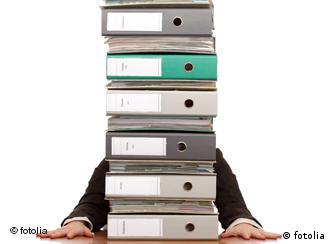 How happy are Germans at work?

Monika Meusch likes her job. She's a full-time commercial worker at Stadtwerke Düren, a German energy supplier. She enjoys the frequent contact with her colleagues and the dynamic work environment.

Meusch belongs to the 89 percent of Germans who are satisfied with their jobs, according to a recent survey by market research group Forsa.

Workers in Germany couldn't fare much better right now, as far as the numbers go. There are currently only 2.96 million unemployed people in the country, 118,000 less than in April, and the lowest rate in 20 years. German workers enjoy an average of 30 days of paid vacation, more than almost anywhere else in Europe. They work 1,650 hours every year, much lower than the European average of 1743 hours. And the global financial crisis has left Germany's economy relatively unharmed.

Workers in the United States, on the other hand, work on average about 400 hours more than Germans. The Japanese even have a special word for an old working practice: "karoshi," which loosely translates as "working to the death." 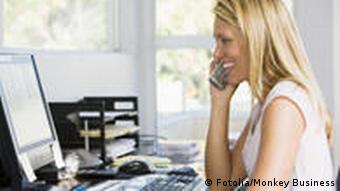 At least when they're at work, Germans can look forward to plenty of vacation days

That makes the working conditions in Germany look quite attractive. However, when you scratch the surface of job satisfaction, there's more than the statistics reveal.

"The working world has got harder," Knut Thiele, a job adviser in Nuremberg, told Deutsche Welle. "The company atmosphere plays a big role, and it got a lot worse."

Although German workers officially only work 37.6 hours, they tend to do a lot of overtime, which boosts real work time to an average of 41.1 per week. That puts Germany into the top five hardest-working countries in Europe.

"There's a discrepancy in Germany between the official work hours and the estimated numbers of unreported hours," explained Celina Proch, a sociologist at the RWTH Aachen, a technical university. She added that Germany's high number of part-time workers, the majority of whom are women, can artificially drive down the average working hours and the unemployment rate.

Feeling the burn when it's too late

People are working more than the numbers show at first glance and, on top of that, work stress has risen. According to a study by the EU commission, 60 percent of Europeans spend a quarter of their work under high stress - which can have a negative impact on their health.

A 2009 study showed that every fifth German worker suffers health consequences from a high stress level which is mostly caused by their jobs. And it doesn't help that German society may perpetuate workaholism.

"It's often seen as positive in our society," said Proch, who is studying the different manifestations of workaholism. "Many people even like to call themselves workaholics and are proud of it, but fail to notice in their recklessness that it can bear consequences not only for themselves, but also for their colleagues and company." 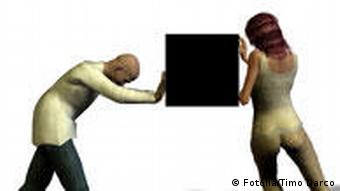 Stress at work can have far-reaching consequences

It's impossible to say exactly how many workaholics there are in Germany, because there is no common definition and not every case is reported. But it's clear that factors including overtime, flexible work hours, job insecurity, and a lack of recognition can all contribute to workaholism.

Meusch, however, has managed to turn those factors into assets. She has flexible hours, but usually comes and goes at the same time every day. Even though she has a permanent contract, she decided to get a Bachelor's degree to complement her vocational training as an industrial clerk.

"I wanted to develop [myself]," said Meusch. "I didn't like the idea of staying in the same position, the same place for many, many years."

Many young Germans think like Meusch and students are flooding the university classrooms: 2.21 million students are currently enrolled, up from 2.02 million in 2008 and 836,000 in 1975.

Meusch and other young workers reflect a changed dynamic in Germany's work culture. Just having a job doesn't guarantee happiness - high employment rates aren't necessarily a good thing if the jobs people have make them sick or unhappy.

"Making sure that employees are satisfied is always of interest to employers because that's what increases their performance," Proch said. And if 89 percent job satisfaction can be taken at face value, Germany's performance should be skyrocketing.

German unemployment dropped again in May, although the rate of hiring slowed slightly. The jobless rate fell to 7 percent of the workforce, bringing the number of people out of work to fewer than 3 million. (31.05.2011)

The head of Germany's labor agency has said the country will face a massive shortage of qualified workers in the coming years, predicting that some 2 million of them will have to be acquired from abroad. (14.05.2011)