Germany's degree system: The shift to the Bachelor and Master

Foreign students have less to worry about when studying in Germany now compared with past decades. Internationally recognized Bachelor's and Master's degrees have replaced virtually all of the degrees formerly conferred. 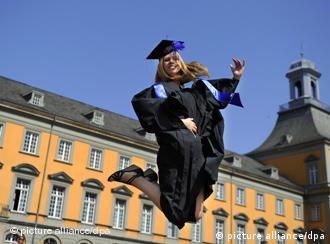 In 1999, Germany signed the Bologna Reform agreement, which obligates participating European nations to create a more uniform educational system. By 2020, all participating countries have agreed to switch over to the Bachelor and Master system.

That means students can get a quicker start in the working world and also earn degrees that are more easily compared and evaluated internationally. The switch to the Bachelor and Master system is especially important for foreign students interested in studying in Germany, since the changes increase the likelihood that degrees earned abroad will be recognized at home.

End of the Diplom and Magister

Prior to the Bologna Reform, German university students earned either a Diplom (in scientific and technical areas) or a Magister (in the humanities and social sciences). Students required at least eight semesters - and typically longer - to complete one of the two degrees.

Well over 80 percent of the programs at German universities now lead to either a Bachelor or Master. A Bachelor's degree is generally intended to be completed after six semesters, while a Master takes an additional two years.

On the other hand, future lawyers, doctors and pharmacists do not earn degrees according to the Bologna reform and are still educated in preparation for a state examination conducted at the end of their studies. However, the process in these fields will also eventually be replaced with some variation of the Bachelor and Master system.

To apply for an undergraduate degree in Germany, applicants must often show they possess certain credentials, like having adequate German skills and good prior educational records. Additionally, some programs require or recommend an internship prior to enrollment, while some arts academies require qualifying tests. Undergraduate degree programs typically lead to a Bachelor or qualify the student to take Germany's state examinations in law or in medicine.

Master's degrees typically require a Bachelor in the same or a closely related field, while PhD programs generally seek students that have earned a Master with academic distinction in the same field.

How are German universities changing?

Academic life in Germany has changed significantly in recent years. Bachelor's and Master's degrees are now the norm, and an initiative recognizing elite universities has provided a new reason to compete for funds. (13.09.2010)