Germany′s army chief of staff resigns over NATO airstrike in Kunduz | Germany | News and in-depth reporting from Berlin and beyond | DW | 26.11.2009

The head of Germany's armed forces has tendered his resignation. The move comes after media reported that the government may have withheld information about a deadly attack that killed numerous civilians in Afghanistan. 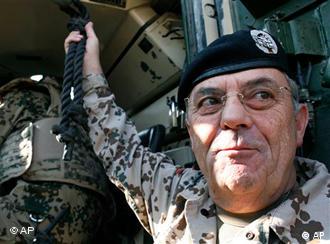 Schneiderhan is the latest casualty of the airstrike

Germany's military chief of staff, Wolfgang Schneiderhan, has stepped down in the wake of revelations about his handling of a deadly bombing raid in Afghanistan.

Defense Minister Karl-Theodor zu Guttenberg announced the resignation in parliament on Thursday as a debate began on Germany's military deployment in Afghanistan. Schneiderhan had "released himself from his duties at his own request," said Guttenberg, adding that Deputy Defense Minister Peter Wichert was also resigning. 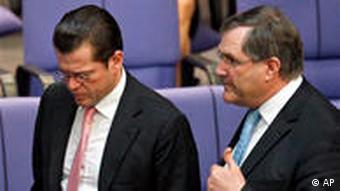 Both the current and the former defense ministers are under pressure

Guttenberg said that Schneiderhan had failed to provide proper information about the incident, in which a NATO report says that 142 people, including civilians were killed. The positions of Schneiderhan and Wichert became untenable after a revelation that the military received images the same day as the airstrike showing some of the dead were civilians, yet did not make this public.

Chancellor Angela Merkel has called for a full inquiry into the aftermath of the attack. Speaking only hours after the resignations were announced, Merkel told reporters, "I've always said that if we want to win confidence, we have to have full transparency."

"The present defense minister of course has my full support if he investigates what needs investigating and puts into effect the necessary consequences," she added.

Speaking at a joint press conference with NATO Secretary-General Anders Fogh Rasmussen, Merkel also failed to defend the former Defense Minister Franz Josef Jung, who was in office at the time of the airstrike. Jung is the current labor minister.

The attack on September 4 against two tanker trucks was called by German Colonel Georg Klein who feared the vehicles could be used in an attack on troops. The exact details of what happened in the incident near Kunduz may never be known, but reports indicate that the truck drivers were murdered, and the stolen trucks later became bogged down in wet sand in a river bed.

Villagers were apparently helping themselves to free fuel when Colonel Klein directed US fighter-bombers to blow up the trucks and the Taliban fighters aboard them. The pilferers were killed too.

NATO's report, which remains classified though its key conclusions are public, criticized Colonel Klein, concluding he overstepped his authority by not checking with ISAF's top command before the strike.

Guttenberg has defended the action, saying that despite "procedural errors" the decision to request the airstrike had been "appropriate in military terms". 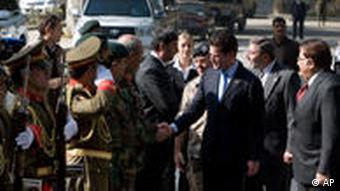 Schneiderhan's resignation follows a report in Thursday's edition of German daily Bild, alleging that former Defense Minister Jung failed to pass on information from a military report and kept secret a video taken in one of the planes involved in the attack.

The newspaper report says that shortly after the attack, Jung was informed that children had been injured. Jung, who now serves as labor minister, contended that only insurgents had been killed in the days following the strike. Opposition leaders are putting pressure on Jung to make a statement before the end of the day.

Jung has denied the allegations and said that he had not ruled out the possibility of civilian victims. But he maintained that initial reports from investigations on the scene showed that only the Taliban and their allies had been hit.

The German Defense Ministry is investigating the allegations.

A class-action suit is being brought against the German government. The suit will seek compensation for the families of people killed in a controversial airstrike in Afghanistan. (21.11.2009)

In a shift, German Foreign Minister Guido Westerwelle and Defense Minister Karl-Theodor zu Guttenberg have been speaking frankly about devising a plan to get German troops out of Afganistan. (16.11.2009)

German federal prosecutors are to look into an airstrike that was ordered by a German commander on Taliban militants in September. NATO has criticized the airstrike, while the German military has defended it. (06.11.2009)