Germany vs. the US in 1937: The "greatest tennis match ever played"

At Sunday's historic Wimbledon, Roger Federer broke the Grand Slam record. But the personal stakes at the 1937 Germany-US Davis Cup duel were higher for German Baron Gottfried von Cramm: He was playing for his life. 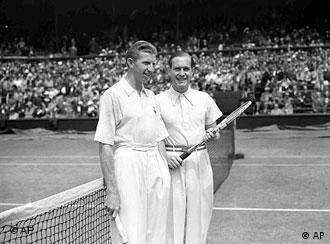 "A Terrible Splendor: Three Extraordinary Men, a World Poised for War and the Greatest Tennis Match Ever Played" tells the story of tennis champion Gottfried von Cramm, who had been secretly gay in Hitler's Germany and his opponent Don Budge, who was the top ranked US player. It is also the story of von Cramm's gay American coach Bill Tilden, who was training the Nazi German team against his own country in a decisive Davis Cup match in 1937. Deutsche Welle spoke to Marshall Jon Fisher, the author of the newly released book.

DEUTSCHE WELLE: Why was Gottfried von Cramm so popular with the crowds? And why was he so important to the Nazi leadership?

Marshall Jon Fisher: Von Cramm was a remarkable character. He was gracious, famous for his sportsmanship and from a noble background, but didn't act that way at all.

He was tall, very handsome, very Germanic-looking - blond, blue-eyed - the Nazis were holding him up as the perfect model of the Aryan athlete. The Nazi officials were of course very interested in using sports figures as propaganda tools, such as (boxing legend) Max Schmeling. (Nazi propaganda minister Joseph) Goebbels made a big deal out of the 1936 Berlin Olympics and declared it a triumph for Germany, so the Davis Cup could have served similar purposes for him. 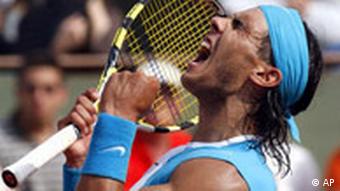 There have been a few other "greatest matches ever" on Centre Court at Wimbledon - the epic Bjorn Borg - John McEnroe duel in 1980 and the stunning marathon between Roger Federer and Rafael Nadal last year. What makes Budge vs. von Cramm, the "greatest match ever"?

Borg-McEnroe and Federer-Nadal were incredible tennis matches, but what was at stake really, except which multi-millionaire would get to hold up the trophy afterwards? It was just tennis. But in the von Cramm-Budge case, it was about winning the Davis Cup, which meant playing for their nation's glory. There were also the personal stakes for von Cramm - he was playing for his life at a time when the winds of war were building up.

He was also playing for a regime which he loathed. It turned out that Gottfried von Cramm was a gay man playing for a government that was executing people like him. He had of course been followed by the Gestapo. They had a big file on him. His lover was Jewish. His wife - he had married a childhood friend--was one-quarter Jewish.

The Gestapo had made it clear to him that as long as he kept winning and that Germany had a chance to win the Davis Cup with him, he would be safe. But if things didn't go too well with him on the tennis court, that might not be the case. There was quite an amazing amount of pressure on him. 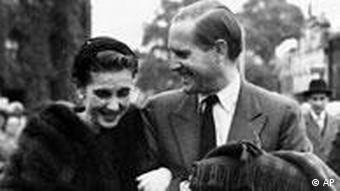 How did the match go?

This 1937 Davis Cup match was supposed to be a walk away for Don Budge, who had destroyed von Cramm two weeks earlier at the Wimbledon final in three straight sets, so everyone thought Budge was going to win this match easily and the Americans would win the Davis Cup, but von Cramm just played stupendous tennis.

Von Cramm won the first two sets. Budge came back and won the second two sets. In the decisive fifth set, von Cramm was up 4 to 1. At this point everyone thought von Cramm was going to win, but Budge comes back again and it goes past 6-6. I'd rather not give away the ending, but it turned into a remarkable fifth set.

So what happened to von Cramm after the match?

It was inevitable that no matter what happened in the match, von Cramm was going to run into trouble in Germany. When he travelled around the world, he became more and more outspoken against the Nazis and upon returning home from his travels in 1938, he was arrested and sentenced to prison for homosexual acts. Now he got off a bit easy due to some good connections he had. Most homosexuals were going to the camps, but he simply went to prison in Berlin for less than a year.

Was it generally known that von Cramm was homosexual?

Other players did know, but it was not publicly known even after the war when von Cramm played the Davis Cup for West Germany. With (von Cramm's American coach) Bill Tilden, people knew. He was not quite as dignified as von Cramm. 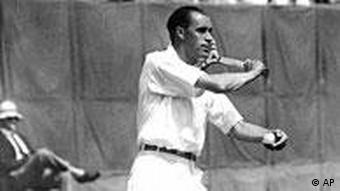 Regarding Bill Tilden - it's very common nowadays for the coach of a national team to be foreign. We see that a lot in international soccer. But on the eve of World War II, what Tilden did, appears treacherous.

It was extraordinary, but not because Tilden was a foreigner. "Big Bill" Tilden completely dominated the tennis world throughout the 1920s and kept the Davis Cup in the United States almost single-handedly. He was also a gay man when one couldn't talk about such things. It was amazing the Nazis hired not only an American, but a gay American to coach their Davis Cup team.

How did Tilden, an American tennis idol, wind up coaching the Nazi German team, of all teams?

Tilden had wanted to coach the Americans for years, even offering to do it for free, but they turned him down every year, presumably because they were afraid of some scandal due to his homosexuality. So when the Germans finally gave him an offer, he was happy to take it.

Tennis today is an individual sport, you play for yourself rather than for your country and it's the Grand Slam tournaments - the US, French, Australian Open and Wimbledon of course - that are important. Could you explain the significance of the Davis Cup back then?

Well of course, we still have the Davis Cup, but it was much more significant back then. All the big international tournaments then were also only open to amateurs. Tennis was much bigger in the sports world back then and the Davis Cup was even bigger than Wimbledon.

The pro era in tennis began in 1968. Gottfried von Cramm survived the war, married Woolworth heiress Barbara Hutton in the 1950s and became a successful cotton importer. He died in a car accident on a business trip in Egypt in 1976. Bill Tilden tried to pursue an acting career in Hollywood, but served prison time for homosexual acts after the war. Because of his convictions, he was shunned from playing and teaching tennis. He died of a stroke in 1953.