Germany unveils its first-ever guidelines for cesarean births | Germany| News and in-depth reporting from Berlin and beyond | DW | 19.06.2020

Nearly one in three children in Germany are born via cesarean section. Now experts have unveiled the first C-section guidelines, which have the potential to unleash a "massive wave" of change in maternal health care. 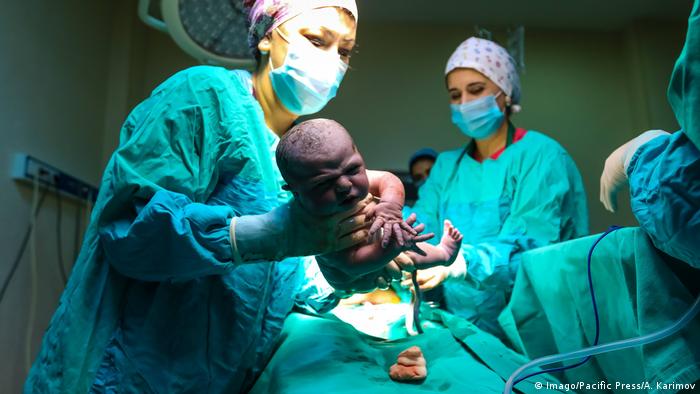 The German YouTube influencer, better known as "Hellcat any," and proud mother of two young children said that she was deeply afraid of being pressured by doctors while in labor.

She'd also heard the stories of other women in Germany who despite dozens of consultations and clear birth plans felt that their autonomy was taken away from them — and while they were at their most vulnerable.

"I thought to myself, I will do a cesarean section because I know what will happen to me and that it will follow a certain pattern. That just gave me much more security in that moment," Ball told DW.

She's not alone. The rate of cesarean section births has doubled in Germany over the past 20 years.

In 1991, the rate of cesarean deliveries was 15.3%, according to data from the Federal Statistics Office, while the rate in 2018 rose to 29.1%. The data puts Germany on par with the United States, where 31.9% of babies were delivered via cesarean that same year.

The figures also sit well above the World Health Organization (WHO) recommendations, which advise a cesarean section rate of 10 to 15%.

It's uncertain whether the rise is due to more women opting for the procedure, or doctors offering it up as the easiest option. What's clear for medical professionals, however, is that something isn't working right in Germany's maternal care.

"We saw that the rates were rising tremendously and that we needed to do something," Dr. Frank Louwen, the vice president of the German Society of Obstetrics and Gynecology (DGGG), told DW.

After noticing the trend, the DGGG got together with researchers, doctors and midwives from over a dozen medical associations and institutions from Germany, Switzerland and Austria.

Together, they worked for years to compile a massive amount of data on the advantages and disadvantages of vaginal and cesarean births.

The result is Germany's first-ever medical guidelines on the procedure.

"It can no longer be the case that women get a cesarean section because someone doesn't know how to do something," said Louwen, who also heads the Obstetrics and Fetomaternal department at the University Hospital Frankfurt.

"Now you have to look at the guidelines and it's all in there."

When is it necessary to have a C-section?

The nearly 140-page guidelines provide a comprehensive and detailed overview of what been scientifically studied, and where gaps in knowledge remain.

The guidelines reveal that for mothers with uncomplicated pregnancies, vaginal birth is the medically preferred option for mother and child. For cesarean section births, the guidelines call for the procedure to be used as often as necessary but as little as possible.

The panel of experts were able to agree that a cesarean section is absolutely necessary in three situations: if a baby is positioned sideways, if there's a threat of a uterus rupture, or if the placenta is incorrectly positioned or detaches prematurely.

For all other cases — namely, the vast majority of cesarean sections — the risks to mother and child need to be considered.

Some women opt for a cesarean out of concern that a vaginal birth could put their baby in stress, or that they believe the surgical procedure is safer, less painful or easier to plan.

Although the surgical procedure is safe in countries with good health systems, it also puts women at higher risk for bleeding, thrombosis and adhesions. For babies, the procedure places them at higher risk of asthma, diabetes, allergies and other chronic illnesses.

No birth is without risks, although studies have shown that vaginal deliveries tend to have fewer complications for the mother. 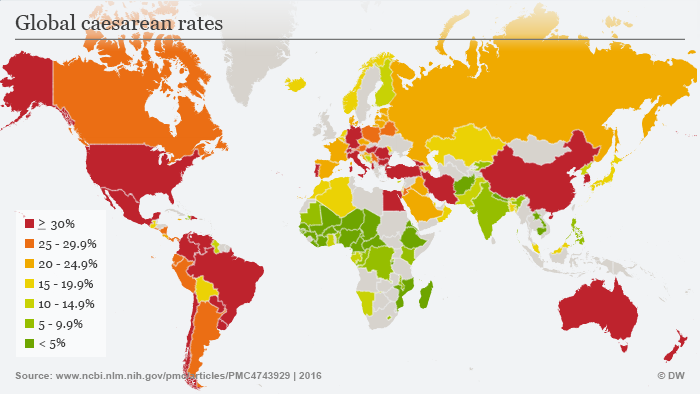 Even across Germany the differences in the number of cesarean section births is staggering.

According to an analysis of hospitals in Germany conducted by the Science Media Center, the cesarean section rates range from as low as 10.4% up to 66.7%.

Nearly one in five hospitals in Bavaria have such high rates that the local authorities are investigating quality standards.

One of the reasons for the higher rates at certain hospitals is that midwives and doctors who are trained in vaginal deliveries as well as difficult births are in short supply. Cesarean sections are also easier for hospitals to plan than vaginal births, take less time, require fewer personnel and also are compensated more by health insurance companies.

The guidelines are poised to usher in a massive shift in the status quo at German hospitals, and a push for more experienced personnel.

If a hospital doesn't have experience in doing a natural birth under difficult circumstances, for example if a baby is presenting breech or bottom first, then the hospital will have to send the patient to another hospital that has experience in both vaginal and cesarean births.

The new guidelines also call for a radical overhaul in the way that consultations with expecting mothers are carried out. Discussions about vaginal and cesarean birthing procedures need to occur at the beginning, not close to the due date at the end.

If in the end, the patient wants to go ahead with the cesarean, and if the reasons are fears about the birthing process, doctors and health insurers are encouraged to provide the patient with psychological support to deal with her birthing anxiety.

'A lack of trust' in German system

Anika Ball welcomed the push for more mental health assistance for women suffering from anxiety about the birthing process, but said it doesn't address the deeper issues that come with having a vaginal delivery in Germany.

"I think that it's simply about a lack of trust," she noted.

Although she had a good experience with her first cesarean section, Anika Ball came up with a different birth plan for her second baby — this time a home birth. Her son ended up having to be delivered via an emergency cesarean in the end after sudden complications arose, but Ball says she views both procedures positively.

She urged for a change in the way doctors and midwives approach vaginal births — and to have it be more focused on the mother's wishes.

These issues might be addressed when the next round of guidelines, specifically focusing on "fetal monitoring," are published next year.

In the meantime, Louwen emphasized that the goal of the C-section guideline is not to take the decision away from the mother or even reduce the rate of cesarean births.

"This doesn't mean that the woman cannot make her own decision, but from now on, she can make an informed decision — with the best scientific evidence," Louwen said.