Germany to Turkey: Own Up to Massacre

The German parliament has agreed on a resolution that will ask Ankara to accept its role in the expulsion and massacre during and after World War I that killed up to 1.5 million Armenians. 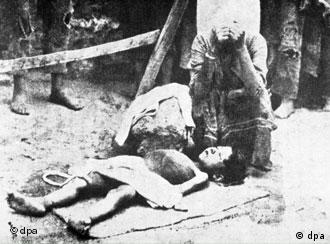 Genocide or the result of war?

The resolution, which is set to win final approval by lawmakers in the next few months, avoids the word "genocide," but calls on Turkey to "take historic responsibility" for the massacres of Armenians by the Ottoman Turkish government and ask forgiveness from the descendents of the victims.

The document, which was drafted by the conservative Christian Democratic Union-Christian Social Union (CSU/CSU) bloc and later modified by a parliamentary committee, is meant to coincide with the April 24 commemoration of the beginning of the expulsions 90 years ago, in Yerevan, the Armenian capital.

"We don't want to want to put the Turkish government on trial," CDU representative Christoph Bergner said. Instead, the goal is to "invite our Turkish friends and partners" to come to terms with the past.

The three-page resolution also recognizes a limited German role in the massacres that killed between 1.2 and 1.5 million Armenians. Germany was Ottoman Turkey's main ally in the war. "Partly through approval and through failure to take effective measures, there was a German co-responsibility for this genocide," said Gernot Erler, the Social Democratic (SPD) deputy foreign affairs spokesman in the Bundestag in a statement. "The (Bundestag) asks the Armenian people for their forgiveness," said a statement. 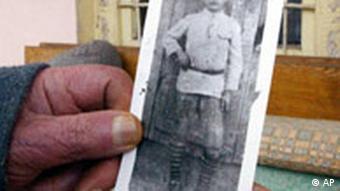 95-year-old Varazdat Harutyunyan holds his 1914 photo while telling to the Associated Press about the the "Great Slaughter" at home in Yerevan, the Armenian capital. Violence against Armenian centers in eastern regions of the dying Ottoman Empire spiked over the summer 1915. Harutyunyan, who was forced from his family's home in the eastern city of Van and lived for weeks in Echmiadzin, remembers an endless procession of burials as thousands died of typhoid, cholera and hunger. Hundreds of thousands of Armenians deemed subversive to the empire, as many as 1.5 million, by many accounts, died in what is today eastern Turkey.

However, in the resolution itself, the word "genocide" is not used. Instead, it refers to "expulsion and massacres."

But Turkey's ambassador to Germany, Mehmet Ali Irtemcelik, condemned the planned resolution as containing "countless factual errors" and said it was being written "in agreement with propaganda efforts of fanatic Armenians."

Germany has been reluctant to address the issue of Turkish and Armenian history in the past largely due to its own 2.5 million Turkish residents. However, a member of the CSU/CSU bloc, Erwin Marschewski, said the EU value system required that countries "shine a spotlight on the dark pages of our history."

"Recognition by Turkey of the Armenian genocide of 1915 and 1916 is important," he said in a statement.

The resolution comes at a sensitive time, since negotiations for Turkey's membership in the European Union are set to begin in October. Critics of the resolution accused the conservative alliance of drafting the resolution to throw another hurdle in the way of future Turkish EU membership, which many conservatives have not supported. The bloc itself has rejected the accusation.

However, German Chancellor Gerhard Schröder is a staunch supporter of Turkey's EU bid and will visit Ankara and Istanbul for talks with political and business leaders there on May 3 and 4.

Armenians themselves are planning a large demonstration on April 24 to commemorate the massacres. They say their forbears were systematically eliminated by Ottoman Turkey's rulers from 1915 to 1923. 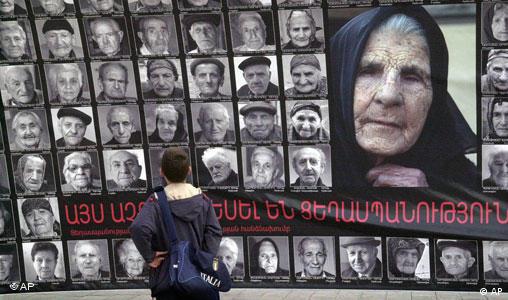 A boy pauses in front of a wall-sized poster depicting the faces of 90 survivors of the mass killings of Armenians in the Ottoman Empire, in Yerevan, Armenia. The composition was done to commemorate the 90th anniversary this Sunday April 24th of the beginning of what Armenians say was the killing of 1.5 million of their people as the Ottoman Turks forced them from eastern Turkey between 1915 and 1923.

Their claims, that between 1.2 and 1.5 million Christian Armenians were killed or died from disease and starvation as a result of planned relocations, are supported by many Western historians.

Ankara has always rejected those claims, saying Armenians have no firm data to back them up. Most Turkish historians say nationalists in Armenia sided with Russia troops when they invaded eastern Turkey. While admitting many Armenians died at the time, Turkey says it was due to war, not planned murder.

The two countries have no diplomatic relations and Turkey shut the border in 1993 to show solidarity with Turkish-speaking ally Azerbaijan, which was then engaged in a conflict with Armenia.

Turkey and the EU's presidency struck an agreement Friday to end an impasse blocking the launch of EU membership talks with Ankara, a Turkish diplomat said. (Dec. 17, 2004)

Joschka Fischer will wrap up his trip to the Caucasus region on Thursday with stops in Armenia and Georgia. His visit in Armenia comes during considerable political instability in the country. (April 22, 2004)