German government has approved an extension of the Bundeswehr's mandate in Kosovo for a further year. Germany has had peacekeepers in the former Serbian province for the past 13 years. 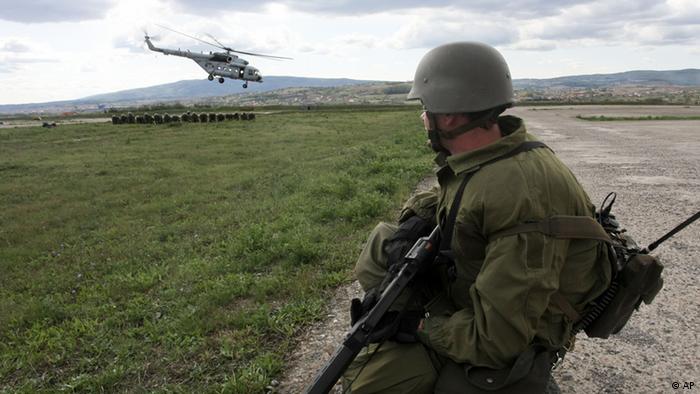 The decision to prolong the mission came at a meeting of Chancellor Angela Merkel's cabinet in Berlin on Wednesday. The extended mandate maintains the ceiling on the number of Bundeswehr soldiers who can be deployed to the former Serbian province at 1,850.

Germanycurrently has around 900 soldiers in Kosovo as part of the NATO-led KFOR peacekeeping mission. That makes the Bundeswehr the largest contingent in the force of around 5,700 troops.

Germanyfirst sent peacekeepers to Kosovo in June of 1999, shortly after a NATO bombing campaign ended a conflict between Serb forces and ethnic Albanians. Following the bombing campaign, the territory - in which the vast majority of the population is ethnic Albanian - was then placed under the administration of the United Nations.

Kosovo unilaterally declared independence in 2008 and has since been recognized by 90 United Nations member states, including 22 from the European Union. However, Belgrade says it will never recognize its former province as a separate state.

Serbs to vote in Serbian elections

Several hundred extra troops from Germany and Austria were sent to Kosovo last month as a precaution ahead of Sunday's Serbian elections, which many Kosovo Serbs who do not recognize the authority of the government in Pristina say they plan to vote in.

Fears of possible trouble were eased somewhat after the Organization for Security and Cooperation in Europe agreed this week to facilitate the voting in the Serbian parliamentary and presidential polls in Kosovo. Pristina had said it would not allow Serbian officials to do so.

The Bundeswehr's current mandate expires in June. The extension still has to be approved by Germany's lower house of parliament, the Bundestag, but this is seen as a formality due to the parliamentary majority held by Chancellor Merkel's center-right coalition. The opposition Social Democrats and Green Party have also expressed support for the move.