Germany to Dodge Syria at Weekend Meeting in Paris | Germany | News and in-depth reporting from Berlin and beyond | DW | 11.07.2008

German Chancellor Angela Merkel will avoid holding official talks with Syrian president Bashar al-Assad when they meet at a Euro-Mediterranean summit in Paris at the weekend, according to officials in Berlin. 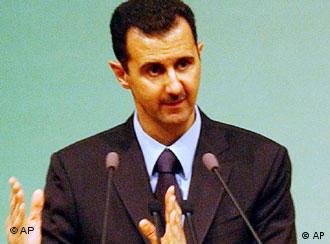 The German government has long been of the opinion that Damascus is intervening "unconstructively" in Lebanon and has called for Syria to formally recognize Lebanon.

Sunday's meeting in Paris is to establish the Union for the Mediterranean, a new club of some 40 countries including EU members, north African states and Middle East nations such as Israel, Syria and Lebanon.

Amnesty International expressed concern on Friday, July 11, that the EU's project does not make cooperation and dialogue with its southern neighbours dependent on progress on human rights. The leading human rights watchdog complained that the bloc was defining better ties purely on commercial and financial terms.

The union is a pet project of French President Nicholas Sarkozy. His country currently holds the rotating presidency of the 27-member European Union.

Foreign policy disagreements between Germany's left-right coalition heated up this week as Foreign Minister Frank-Walter Steinmeier found himself on the defensive for meeting with his Syrian counterpart. (18.01.2008)

Syria has enlisted the help of Germany to push forward economic reforms and attract foreign investors. In bilateral talks, Germany has renewed its commitment to Syrian development. (10.04.2007)