Before Germany is able to implement its plan to vaccinate 25 million people against the A(H1N1) swine flu virus, the vaccine's effectiveness needs testing. About 1,200 people are needed to take part in the trials. 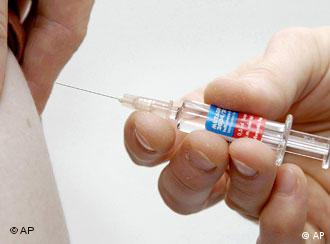 Three months after the swine flu broke out, testing of a potential vaccine to fight the virus in both adults and children is ready to begin, according to the University of Munich department for infectious and tropical medicine, which is responsible for testing adults.

As many as 1,200 people between the ages of 18 and 60 are required to test a potential adult vaccine. Participants are administered three doses of the vaccine, two within a period of three weeks and the third after a year's time, and receive 50 euros ($72) per dose.

The University of Mainz oversees drug testing on children in Germany. Children taking part in the trials must be at least six months old, doctors in Mainz said on Tuesday. They did not specify how many participants they required. 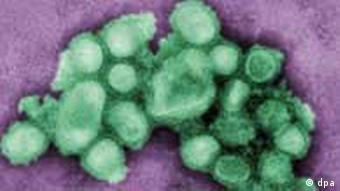 Most cases of swine flu in Germany have been mild

"We know that over the course of history there have time and again been flu pandemics," said Norbert Pfeiffer, head of Mainz University's medical department. "Participants in this study will be greatly contributing to the effective fight against a pandemic."

Other trials around Europe

Independent trials of a drug from the Novartis pharmaceutical company are also being conducted in other European nations. The medicine resembles other flu medications based on cell cultures that are already on the market, but include properties of the A(H1N1) swine flu virus.

A set of preliminary results from the tests are expected in 43 days, according to Frank von Sonnenburg, the coordinator of trials in Germany.

"Vaccinations might be possible by the middle of October," he said Monday.

The studies currently underway in Germany are designed to show how well humans' immune systems react to the pathogen used in the vaccine, von Sonneburg said, adding that such information would be critical in knowing how well the treatment would protect people from future infection.

Two ways to one vaccine

In addition to using cell cultures to fight the new virus, drugs are also being created by germinating the virus in fertilized chicken eggs in a process that takes up to six months. 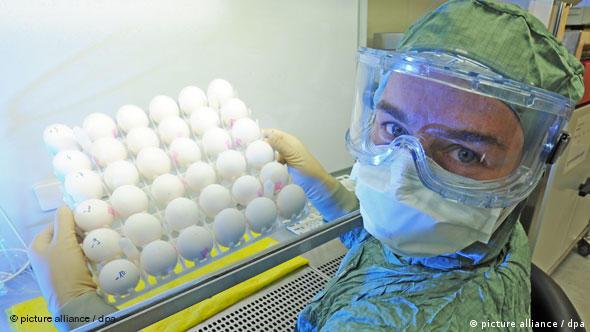 Though they require more time, egg-based vaccines have long been used in developing medicines to fight the flu. The current egg-based vaccine under development is based on treatments created to combat the H5N1 avian virus.

"The fundamental information has been supplied by the H5N1 vaccine," said Susanne Stoecker, a spokeswoman for the Paul-Ehrlich Institute, the federal body responsible for approving the use of vaccines. "It is a well-known flu vaccine with which we have decades of experience."

Proteins are added and removed from the vaccine each year without causing health problems when anti-flu medication is manufactured, she added.

With demand for swine flu treatments high, using both methods will maximize the amount of the vaccine that can be created before winter begins in the northern hemisphere, von Sonnenburg said.

About 6,800 Germans have been infected with the swine flu virus, according to statistics from the Robert-Koch Institute, the country's main institution for disease control and prevention. Most of the cases have been mild, the institute said.

A leading European Union health official says the number of swine flu infections in the 27-member bloc could jump sharply with up to a million cases expected by the fall. (02.08.2009)

Many German companies are gearing up for the possibility that swine flu could spread through their extensive work forces. Some have cut back on business travel, while others have come up with simpler measures. (30.07.2009)

No reason for swine flu panic in Germany, says expert

The rate of swine flu cases has increased dramatically in recent days in Germany, but an expert at Berlin's Charite hospital told Deutsche Welle that the jump hasn't come as a complete surprise. (28.07.2009)