Germany on Tuesday filed a lawsuit against Italy at the Hague-based International Court of Justice (ICJ) in an attempt to prevent Italian courts from awarding compensation to victims of Nazi war crimes. 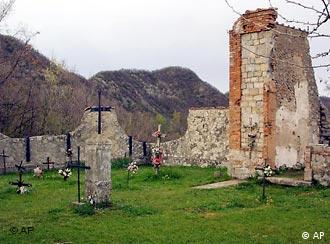 Germany is challenging an October ruling by Italy's highest court ordering Germany to pay around 1 million euros in damages to the families of nine victims killed by the German army in Civitella, Tuscany in 1944. The massacre claimed the lives of 203 people.

On Tuesday, Germany urged the ICJ, the UN's main judicial body set up in 1945, to overturn the Italian court's ruling.

"In recent years, Italian judicial bodies have repeatedly disregarded the jurisdictional immunity of Germany as a sovereign state," Germany said in its application.

The ruling from Italy's highest appeal court in September was the first time an Italian court had ordered Germany to pay compensation in a criminal case.

Germany argues it should be immune from prosecution by private citizens. The country fears that allowing the ruling to stand could lead to hundreds of additional cases being brought against it.

A lawyer acting for the German government argued before the Italian court that previous agreements between the two countries had put an end to this type of case.

Modern Germany accepted moral responsibility for war crimes committed in the name of Germany in Italy by the Nazis and desired a dialogue with survivors and relatives, German foreign ministry spokesman Jens Ploetner said last month.

However, financial compensation claims were closed under a 1961 treaty between Germany and Italy under which the German government paid 40 million marks to settle claims.

Germany to Fight Court Ruling on Damages for Nazi Crimes

Italy's highest appeal court, the Cassation, ruled that Germany must pay compensation to nine people whose relatives were killed by the Nazis in a 1944 massacre. (22.10.2008)

A 90-year-old former lieutenant in Nazi Germany's forces, on trial in Munich for leading a murderous reprisal that killed 14 civilians in Italy in 1944, has denied he was involved in the crime. (15.09.2008)