Winds sweeping Europe have disrupted rail, road and aviation traffic across Germany, with trains halted in the country's most populous state. One man was killed when a tree fell on his car.

Storm "Eberhard" swept eastward across Belgium and the Netherlands and into central and southern Germany on Sunday, toppling trees onto rail tracks and motorways. Some flights were canceled at Frankfurt and Cologne/Bonn airports or were redirected.

In the earliest-affected state, North Rhine-Westphalia (NRW), a 47-year-old motorist was killed by a falling tree in its eastern Sauerland region.

The village of Föritztal-Mönchsberg in eastern Germany was cut off from the world by falling trees. Several residents who were unable to return to their homes were given accommodation by the fire brigade or aid organizations.

Mid-afternoon Sunday, German Rail had ordered trains across NRW, Germany's most populous state, to halt at the next available station, citing safety concerns. Passengers were offered ticket refunds or "flexible" usage once the storm passed.

International trains from NRW to Amsterdam and other hubs in the Netherlands and Belgium were also canceled, it said.

Many trains were operating again by Monday morning, though a German Rail spokeswoman said travelers should be prepared for delays. Some trains remained canceled on the high-speed route from Cologne to Frankfurt, she said. 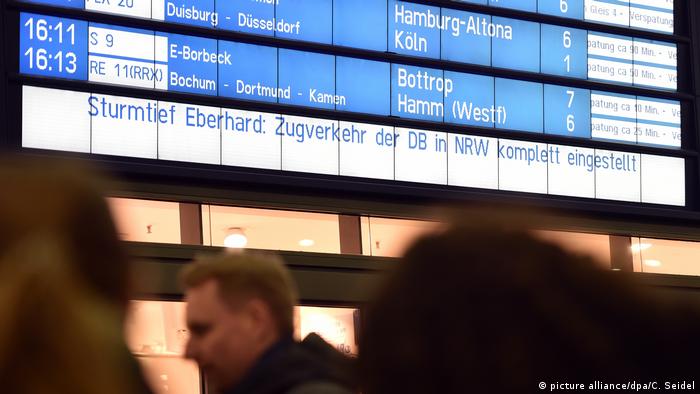 Austrian Federal Rail (ÖBB), which runs night trains across Germany, said four of its Sunday night services had been canceled.

In NRW's riverside city of Duisburg, near the Dutch border, a heavy dockside loading crane toppled into the Rhine River but left its operating cabin, which was unmanned at the time of the accident, above water. Zoos in Dortmund and Essen were shut to guests.

In Frankfurt in the state of Hesse, a tree fell on a house, but without injuring anyone, police said.

Further south, toward Mannheim and Stuttgart, fallen trees prompted the closure of track segments in the states of Rhineland-Palatinate and Baden-Württemberg (BW).

In BW's mountainous Black Forest region, winter season ski lifts were halted. Across its Feldberg peak, gusts had reached 150 kilometers per hour (93 miles per hour), said a spokesman for lift operators. At Hirschberg in BW, a fueling station's roof was ripped off (main picture above).

Train drivers in Saxony were urged to reduce speed in case of wind-blown obstacles.

A forecast map published by the German Meteorological Service (DWD) showed "Eberhard" on a trajectory toward western Poland.

As the evening approached, the DWD has predicted gusts of up to 120 kilometers per hour (75 miles per hour).

Similar velocities had been recorded in Belgium, said another service, wetter-online, based in Bonn.

Sweeping in across Britain from the northern Atlantic, "Eberhard" more or less tracked an earlier storm, "Dragi," that swept Germany on Saturday, prompting alerts by meteoalarm, a multilingual European weather service.

High winds and rain battered parts of Germany over the weekend, causing widespread damage and halting long-distance and regional trains. At least one person was killed when a tree fell on a car. (11.03.2019)