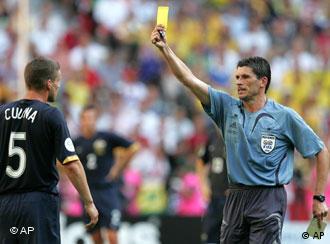 Merk told German sports magazine, Kicker, this week that he has drawn up a plan in which each team as well as the referee will be allowed two challenges each for a match total of six in disputed incidents.

The three-time World Referee of the Year said that only one challenge should be allowed in the final 10 minutes to avoid time-wasting tactics.

"The decision must come quickly, and that is possible with today's technology," said Merk. The replay judges are to be the mandatory referee observer, a member of the national soccer league and a former player or journalist.

Merk, 45, has long been toying with the idea, but made his proposal public after committing a big mistake himself last Saturday in the Bundesliga when he allowed Werder Bremen's goal against Borussia Dortmund even though scorer Markus Rosenberg was clearly offside. 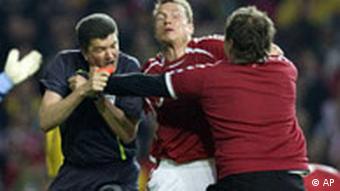 "You have to think about changes. They must be as non-invasive as possible but provide maximum efficiency," Merk told Kicker.

Merk admitted that not all mistakes can be erased through his scheme. But he insisted that "we must act on behalf of football if we have the chance to erase two or three of five mistakes."

Merk's proposals for replays -- which are used in sports such as tennis and American football -- have drawn mixed reactions.

The world soccer governing body FIFA firmly opposed all calls for replays and is only ready to introduce a chip ball to determine goals.

"Getting upset is part of the game"

The German soccer federation, DFB, has asked Merk to make his dossier available to them before making any comments while Merk said that some referees support his plans.

"It has always been part of football to get upset about decisions from the referees," said Heidel.

But Merk would not buy this view: "I am surprised by statements that mistakes are part of football," he said.

"I too want football to remain a fast game, emotional and with as few breaks as possible. But you have to think about changes."

The Bundesliga made history this week when it announced that Bibiana Steinhaus had been promoted to the second division. Never before has a woman been allowed to referee a men's match at that high a level in Germany. (21.06.2007)

Never before have 12 teams been fighting relegation so late in a season. We examine why the Bundesliga has taken such a surreal turn and how individual performances, not team spirit, may determine some clubs' fortunes. (13.04.2007)

Do you think there should be video replays during soccer games? Please include your name and country in your reply.