Germany remembers Stauffenberg on execution anniversary | Germany| News and in-depth reporting from Berlin and beyond | DW | 20.07.2010

The commemoration ceremony for Claus Schenk Graf von Stauffenberg and his co-conspirators took place at the site of his execution, the Bendlerblock, on Tuesday. The Bendlerblock is now the German Defense Ministry. 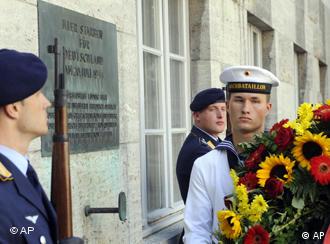 July 20 marks the 66th anniversary of the execution of Claus Schenk Graf von Stauffenberg, the German army officer and leader of a resistance movement that very nearly assassinated Adolf Hitler in 1944.

The large number of politicians, senior military officers, reporters, and representatives of various memorial organizations present at Tuesday's ceremony are a testament to the importance Germany still attaches to the resistance movement that crystallized around Stauffenberg during World War Two. 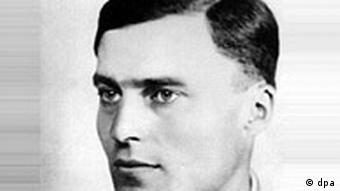 Stauffenberg's actions shaped the principles of the post-war German army

The resistance hero was executed along with four of his co-conspirators in the courtyard of the Bendlerblock building, and the first commemoration took place here in 1952, under the supervision of Ernst Reuter, Berlin's first post-war mayor.

Reuter's central message that day – that the failure of Stauffenberg's plot did not mar its moral importance for Germans after the war – was taken up by the current mayor, Klaus Wowereit, as his own guiding theme.

" 'Their work was not in vain' - Ernst Reuter's sentence has become the motto of this commemoration in the past 58 years," Wowereit said in his speech. "By their actions, the women and men of the resistance set ethical benchmarks, and so became role models."

German Defense Minister Karl-Theodor zu Guttenberg echoed the mayor's sentiments, and spoke of the emotional intensity with which the resistance movement's actions still resonate directly today. "They show us living today that even in the darkest days of dictatorship, there was another, a better Germany," he said.

The mutiny that defined the German army

But the most impressive speech was delivered by the venerable US historian Fritz Stern, who spoke of the vital legacy that the resistance bequeathed to the German army. "The idea of a citizen in uniform is the role model of the German army," he said. "The warning that even a soldier must follow his conscience – to the point of disobedience – is the legacy of the resistance." 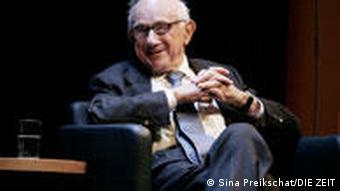 Drawing comparisons with the French resistance, Stern also spoke of the new, wider perspective with which the German resistance movement is being regarded in Europe, and quoted former French Europe Minister Noelle Lenoir, who honored one of Stauffenberg's surviving co-conspirators - Philipp von Boeselager - in 2004 with generous words. "With their blood, they wrote one of the most heroic and horrifying pages of German history," Lenoir had said, "Their sacrifice did not spare Germany, but it saved Germany's honor." Stern called this, "A striking tribute!"

After his speech, the military band and the laying of wreaths, Stern warned that the commemoration of resistance fighters should not be reinterpreted for modern political purposes.

"It should never be, as the saying goes, instrumentalized," he told Deutsche Welle. "It shouldn't be manipulated. People should know about it, recognize it and honor it. Period."

Ceremonies marking the anniversary of the failed attempt to assassinate Adolf Hitler will be held at sites around Berlin on Tuesday, as Germany remembers the attempt that came closest to killing the Nazi leader. (20.07.2010)