Germany's parliament rejected a plan to put the draft of the EU Constitution up for a public referendum, sending a strong message to other countries two weeks before EU leaders are to adopt the treaty. 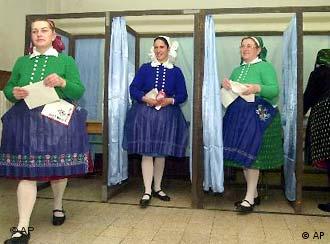 A referendum, like this one in Hungary, won't happen in Germany

Politicians from the ruling Social Democratic and Green party as well as the opposition Christian Democratic Union rejected a proposal by the liberal FDP party to change Germany's constitution to allow the referendum.

The liberals had argued that a plebiscite would spark interest in the European Union among Germans and support for the European Constitution.

"We should work to make Europe not only an issue for heads of governments but for the people on the ground," FDP head Guido Westerwelle said.

The draft of the treaty, which serves as a rough blueprint on the course the EU will take, is set to be adopted in its final form at an EU summit on June 17-18.

Following the summit attended by the EU's 25 member states, Britain, Ireland, Denmark, the Netherlands, Luxembourg, Spain, Portugal and the Czech Republic will put the treaty to a public referendum in their own countries before ratifying the treaty. France is reportedly mulling a similar move.

The decisions have reaped criticism from some European leaders, among them German leaders, who fear national referendums would reject the constitution, scuttling two years of painstaking work. France and Germany were reportedly planning to go ahead with the current draft even if it wasn't ratified by every EU member, according to reports.

Peter Hintze of the conservative Christian Democratic Union said Germans would most likely use such a referendum as an occasion to voice their anger at Chancellor Gerhard Schröder's domestic reforms rather than make a sober decision on the EU's future.

"The problem with plebiscites is that people virtually never vote on the issue in question," Hintze said.

A growing number of politicians in Germany are coming out in favor for an EU-wide referendum rather than separate national referendums. Bundestag president Wolfgang Thierse said the concept of the EU's 450 million citizens voting was a "fascinating idea," and could produce a "new, and possibly emotional sense of community."

But Denmark has already come out against such a referendum, and other countries are expected to follow.


"I do not want to initiate a Europe-wide poll, because it is a national Danish decision," Prime Minister Anders Fogh Rasmussen said recently.

On Friday the German parliament hears debate on holding a referendum on the EU Constitution. Regardless of the outcome, a small town in western Germany is already planning to hold its own plebiscite. (May 28, 2004)