Germany Proposes Plan for Ending Violence in Abkhazia | Germany| News and in-depth reporting from Berlin and beyond | DW | 08.07.2008

With recent bombings killing four people in Georgia's breakaway region of Abkhazia, Germany has proposed a plan for ending the ongoing conflict in the region. 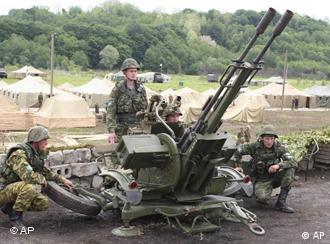 Russian peacekeepers have added to tension in the region

Germany wants to mediate a diplomatic solution to the conflict with the aim of preventing tensions from escalating into a military conflict between Russia and Georgia, Der Spiegel magazine reported in its Online addition on Monday, July 7.

Germany's Foreign Minister Frank-Walter Steinmeier proposed a three-step solution to the conflict to a group of United Nations experts on the region last week. The first step would call on all sides to denounce violence and to allow the return of 250,000 refugees, Spiegel reported.

The second would be to organize a donor's conference to raise funds necessary for reconstruction. The third step would be to find a political solution which would determine whether Abkhazia remained part of Georgia or was granted independence.

"We stand at a critical crossroads," Steinmeier reportedly said, warning participants not to "play around" with negotiations.

European leaders have grown increasingly concerned in recent days that the tensions in the region are leading towards a military conflict.

On Sunday, six explosions rocked the border between Abkhazia and Georgia. Russia and Georgia have blamed each other for the blasts in Gali, which killed a security chief, a United Nations translator and two others.

On Monday, the secretary-general of the Council of Europe, Terry Davis, described the attack as terrorism.

"These murders risk further aggravation of the tensions in the country, and I am very concerned that the situation may spin out of control," he said in a statement.

France, which holds the rotating presidency of the European Union, said on Monday that it was very concerned and called "on all parties to exercise the greatest restraint and for the resumption of dialogue as quickly as possible in order to avoid an escalation in violence."

Abkhazia and South Ossetia broke away from Georgian rule in the early 1990s. During the conflict that followed the breakup of the Soviet Union, several thousand people were killed and hundreds of thousands were forced to flee their homes and have become refugees in Georgia.

Georgia regularly accuses Russia of seeking to annex Abkhazia and derail its efforts to join the NATO military alliance.

Russia accuses Georgia of trying to take back the separatist province of Abkhazia by force. Russia's defense ministry recently warned that such a move could "turn the conflict into a new war."

Georgia, a staunch US ally, has looked to the West for support in the issue.

Russia and the European Union began talks on a long-delayed strategic partnership accord, with Russian President Medvedev hailing a new chapter in their sometimes tense relationship. (27.06.2008)

In what could prove to be the first breakthrough in the stand-off over its separatist Abkhazia region, Georgia has made an offer to Russia to divide the region into zones of influence, a Russian paper claims. (27.06.2008)