Germany Plans Next Round of China Aid

The German army will transport an additional 80 tents and other materials to China to help homeless earthquake victims. 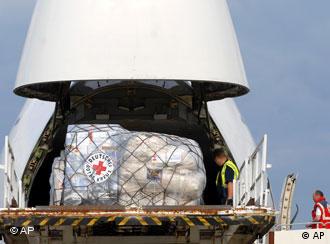 A spokesman for the Bundeswehr in Berlin said the move would give some 700 additional people a provisional home. The material weighs a total of 200 tons and is valued at 3 million euros ($4.7 million).

Bad news about a recent helicopter crash would not affect the plan, a spokesman for the Bundeswehr in Berlin said. On Saturday, May 31, a military helicopter loaded with injured passengers crashed without a trace, the official Xinhua news agency reported.

Also Saturday, the first child was born in the mobile German Red Cross hospital in the city of Dujiangyan. The baby was named Zhong-De Fang, which means "China-Germany." To date, the hospital has treated more than 3,000 patients. With more than 500 patients per day, the hospital is treating twice as many patients as it had planned.

Meanwhile, on Saturday, some 200,000 people were evacuated from the earthquake area, in Sichuan province. A million further inhabitants were told to prepare for evacuation in case a dam there broke.

China's President Hu Jintao visited the Shaanxi region, north of Sichuan, on Saturday. The region was also hurt by the earthquake, which struck on May 12 and was responsible for some 69,000 deaths. Around 19,000 people are still missing.

No epidemic is foreseen

On Monday, May 2, China said the earthquake would not lead to an epidemic outbreak. Emergency living quarters had been disinfected, the survivors had been told how to proceed, and corpses were burned or had been brought far enough away from water sources to make infection unlikely.

On its Web site, the health ministry wrote: "We have the knowledge and are certain enough to guarantee that there will not be any epidemic after this catastrophe."