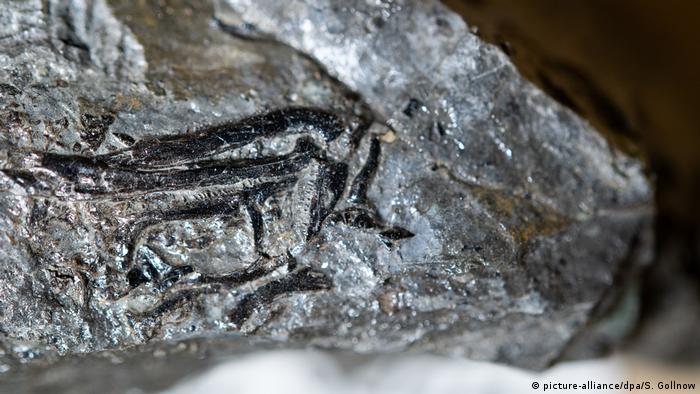 The tiny skull of a miniature prehistoric reptile has been discovered in Germany, scientists from the Stuttgart Natural History Museum announced on Thursday.

The fossil was found in a quarry in the town of Vellberg in the state of Baden-Wurttemberg, and belongs to a new type of dinosaur of around 10 centimeters (3.9 inches) in length. The creature is believed to have lived around 240 million years ago.

"It is a scientific sensation," said paleontologist Rainer Schoch. The miniature skull shows a great deal of similarities to modern-day lizards and snakes.

Missing link to snakes and lizards

"The little animal is exciting, because we know so little about the ancestors of lizards and snakes," Schoch explained. "We have discovered a new species."

The animal  has been given the scientific name Vellbergia bartholomaei, after the name of the town where it was discovered and the fossil collector Alfred Bartholomä.

While it has popularly been reported by some outlets to be a "mini-dinosaur" because it shared a reptilian ancestry with the dinosaurs, the Vellbergia bartholomaei in fact is an ancient lepidosauromorph — a group of cold-blooded reptiles whose extant descendants include lizards, snakes and tuataras. Its ancestors split off from what would become the large dinosaurs some tens of millions of years prior.

The 12-millimeter-long skull was examined under a tomograph to determine how the animal ate and the size of its brain.

Editors' Note: This article has been corrected to reflect the correct taxonomy of the fossil.

'Godzilla: King of the Monsters' delivers creatures and destruction galore

The latest film about the dinosaur-like destroyer uses a winning forumla that harkens back to older Godzilla films. While smashing and dashing the world around him, the Japanese monster has symbolized different things. (29.05.2019)

Called the "frozen dragon of the north," a new species of flying reptile, Cryodrakon boreas, has been discovered in Canada. The pterosaur is thought to have had the wingspan of a small airplane. (11.09.2019)