Germany marks 50 years since building of the Berlin Wall | Germany| News and in-depth reporting from Berlin and beyond | DW | 13.08.2011

Germany marks 50 years since building of the Berlin Wall

Germany on Saturday commemorated the 50th anniversary of the construction of the Berlin Wall with a memorial service and a minute of silence in the capital in memory of those who died trying to flee to the West. 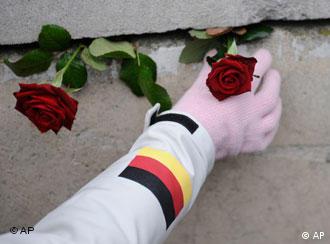 Germans are remembering those who died trying to cross the Wall

German Chancellor Angela Merkel, who grew up in the East, President Christian Wulff and Berlin Mayor Klaus Wowereit attended a commemoration in the capital, followed by a church service at a chapel built where the Wall stood for almost three decades.

"I myself, from when I was seven years old, can remember the horror that the building of the Wall created in my family," Merkel said in a statement. "We were torn from our aunts and grandparents. What is even more unforgettable for me is the happiness the fall of this appalling structure made us Germans feel in 1989."

Flags flew at half mast on the parliament and church bells tolled at noon as Germans were called to observe a minute of silence in remembrance of the 136 people who are known to have died in Berlin while trying to cross the border.

Historians say this number may have been as high at 700.

"No one knows the true figure," Wulff said during the commemoration in Berlin's Bernauer Strasse, the scene of many escape attempts. The place today houses a memorial visited by half a million people every year. 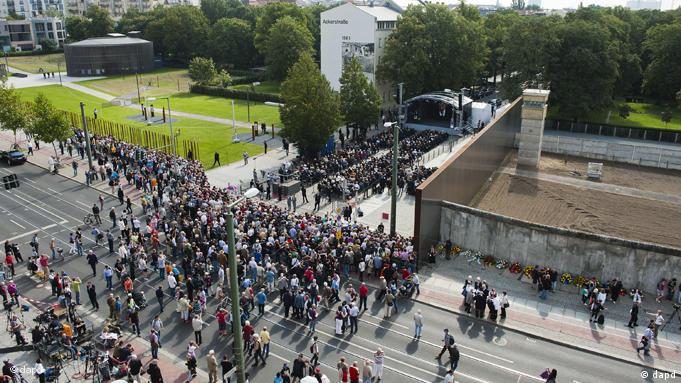 An aerial view of the memorial service at Berlin's Bernauerstrasse

"We bow our heads in remembrance of all who died at the Wall and of the hundreds who died on the inner German border," Wulff said. "The dead and wounded, the hundreds of thousands who were imprisoned and politically harassed, aren't the only victims of this Wall.

"Millions were also forced to renounce the lives they wanted to live," he added.

The commemorations began overnight with a more than seven-hour-long reading of the names and stories about the lives of those killed seeking freedom.

Memory of the wall

Berlin Mayor Klaus Wowereit said the Wall must not be forgotten.

"The Wall was part of a dictatorial system, an unjust state," Wowereit said. "It illustrated the bankrupcy of a system people wanted out of. The Wall is now history, but it must not be forgotten. 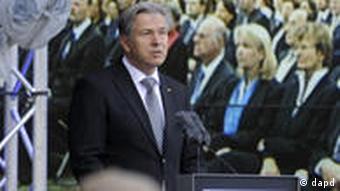 "It is our responsibility to keep its memory alive and pass it on to future generations ... so that such injustices never repeat themselves," he added.

In 1961, more than 2.5 million of East Germany's 19 million inhabitants had moved to the West. With thousands leaving every day, communist authorities feared the exodus would seriously undermine the state.

On August 13, 1961, the East German regime began sealing their border. Soldiers blocked off the streets, cut off rail links and began building what was initially a barbed-wire fence.

It became a wall which spread for nearly 160 kilometers (100 miles). In some cases, it cut straight through streets, neighborhoods and public spaces.

Known in the East as the "anti-fascist protection wall," it became a symbol for the geographical, ideological and political divide between Europe's democratic West and the communist East controlled by the Soviet Union.

The Wall finally fell on November 9, 1989, in a bloodless uprising which saw East Germans allowed to cross freely into the West for the first time in nearly three decades.

Leaving West Germany for the East as a teenager, musician Wolf Biermann hoped to live out his communist ideals. But the civil rights activist’s nonconformist views came in conflict with the East German leadership. (12.08.2011)

In pictures: a look back at the building of the border

The Wall scarred an entire generation