Germany forces hand over command of Kunduz camp to Afghans

Bundeswehr troops have officially handed over command of their base at Kunduz in northern Afghanistan to local security forces. Germany’s outgoing defense and foreign ministers attended the ceremony. 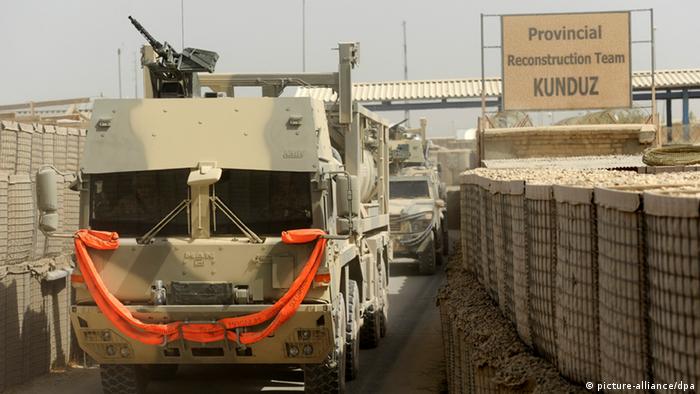 Defense Minister Thomas de Maiziere and Foreign Minister Guido Westerwelle traveled to the German forces' field camp at Kunduz from the Bundeswehr's Afghanistan base at Mazar-i-Sharif, which they had flown into unannounced early on Sunday.

Speaking at the ceremony, de Maiziere spoke of the sacrifices German soldiers had made in Kunduz, where 18 were killed in attacks and firefights during the course of the NATO-led International Security Assistance Force (ISAF) mission.

"For us, Kunduz is the place where the Bundeswehr fought for the first time, and had to learn to fight," De Maiziere said. "Kunduz will always be part of our collective memory," he added.

Overall, a total of 54 German soldiers have died in Afghanistan, 35 of them through attacks or in combat.

All of the 900 Bundeswehr troops remaining in Kunduz are to have withdrawn from the camp by the end of this month. After the pullout, though, a small section of the camp is to be reserved for as many as 300 German troops to use in the case of a short-term deployment there.

The mission in Afghanistan has dominated German politics like no other intervention in the last few years. German soldiers died, the withdrawal was delayed. But the major political parties all draw different conclusions. (06.09.2013)

In total, around 4,000 German soldiers are currently in northern Afghanistan as part of ISAF. At the peak of their deployment, more than 5,300 German troops were stationed in the country. All ISAF combat troops are to pull out of the country by the end of 2014, when Afghan forces are to have assumed responsibility for security for the entire country.

Foreign Minister Westerwelle used his remarks at Sunday's ceremony to pledge Germany's ongoing support for Afghanistan, beyond the withdrawal of combat troops.

Germany has committed to contributing as many as 800 troops to Afghanistan beyond 2014, when an international training mission is to take over from ISAF. Berlin has also earmarked hundreds of millions of euros in aid for Afghanistan over the next three years.

Sunday's trip marked marks the first time de Maiziere and Westerwelle have travelled to the war-torn country together, although both have made several trips individually to Afghanistan in their current posts.

For Westerwelle, it is presumed to be his last such trip, as his liberal Free Democrats failed to clear the five-percent hurdle required to elect parliamentarians to the Bundestag in the September 22 general election. It is also not clear what role de Maiziere might play in a new coalition government under Chancellor Merkel.