Police in the southern German city are investigating after several people were injured and one killed when a single shooter opened fire inside a lecture hall before taking his own life.

One woman was killed and three people injured in a shooting at Heidelberg University on Monday.

Police said at a press conference Monday evening that a man entered a university lecture hall with a double-barreled shotgun and another firearm as a class was running and opened fire.

Four people were wounded. A 23-year-old woman died several hours later in the hospital; the other victims suffered injures in the face, back and legs, police said.

German Chancellor Olaf Scholz said he was shocked by the shooting.

"That one student has died of her injuries ... It tears my heart apart to learn of such news,'' Scholz said.

What happened during the shooting?

Police in the southwestern German city said they received several emergency calls shortly after 12:20 p.m. They were able to respond quickly and were on scene within minutes. Over 400 police officers were involved in the subsequent operation.

It was quickly determined that the shooter had acted alone and that there was no larger danger to the public.

The suspect was identified an 18-year-old biology student, who turned the weapon on himself after the shooting. Police said the suspect had no signs of life by the time they could approach his body.

Police said they found a backpack belonging to the shooter containing a large amount of ammunition. At first, police stayed clear of the stricken suspect and his bag, suspecting it might contain explosives. 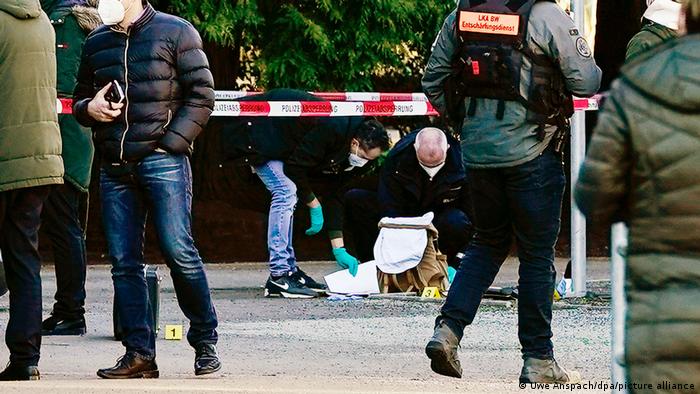 Police investigate near the scene of Monday's shooting in Heidelberg

No motive was released by police, and an investigation is ongoing into the suspect's background and how he acquired the weapons.

DW reporter Stephanie Burnett has been following developments in Heidelberg and said the suspect had no prior record and police were trying to determine how he managed to obtain the weapons.

"He had no criminal record, and it is understood he did not have a license to purchase these weapons as they are understood to have been purchased from abroad. So investigations are ongoing as to how he came to acquire these weapons, as well as what the motive is behind this," Burnett said.

Police said the weapons were not licensed although a proof of purchase was discovered during initial investigations.

The man is understood to have lived alone in nearby Mannheim, and was not known to police.

The man had sent a WhatsApp message to his father shortly before the incident, saying words to the effect of "now people must be punished," at least as relayed by Mannheim police chief Siegfried Kollmar. In the same message, Kollmar said, the suspect expressed a desire to be buried at sea.

How have people reacted?

"My thoughts are with the victims, their relatives and of course the students of Heidelberg University," Chancellor Scholz said.

Heidelberg Mayor Eckart Würzner said it was "hard to believe" that a shooting like this could happen in the city, which is located south of Frankfurt and has a population of around 130,000.

Heidelberg University is the oldest in Germany, and has over 30,000 students.

The deputy interior minister of Baden Würtemberg, Thomas Strobl, said that the worldwide scientific community was watching what happened Monday with "shock and empathy."