Germany Bans All Arms Exports to Iran | Germany| News and in-depth reporting from Berlin and beyond | DW | 31.08.2007

The German government has banned firms from importing goods to Iran that could be used for military purposes, thus reinforcing an earlier EU decision to tighten sanctions against Tehran in the ongoing nuclear row. 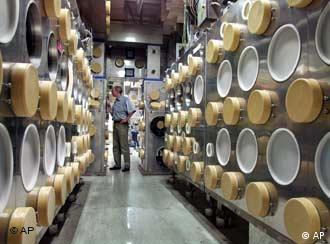 In April this year, the European Union decided to step up sanctions against Iran amid growing concerns in the international community that the country was covertly enriching uranium to build a nuclear bomb. At the time, Tehran proclaimed "industrial" enrichment capacity, a level starting with 3,000 centrifuges running at supersonic speed.

Saying it was reacting to the EU's political decision to raise the stakes in the nuclear row with Iran, the German government on Thursday said it was imposing a general ban on all arms deals with Iran.

That includes the sale, export as well as transfer of all military goods to Teheran. In addition, German firms will no longer be able to import military equipment from the country irrespective of their origin. Berlin also underlined it was prohibiting the export of all so-called dual-use goods, that can be used both for military and civilian purposes, to another EU member state if the goods were meant to be supplied to Iran from there. 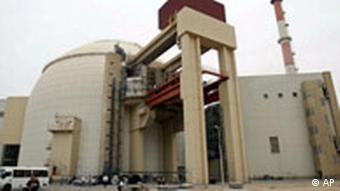 The reactor building of the Bushehr nuclear power plant, south of the capital Tehran

Some German firms have been under suspicion for illegally supplying parts for Iran's nuclear program. In July this year, the prosecutor's office in Potsdam, near Berlin, said it had been looking into illegal exports to Iran since September 2004. In defiance of a ban on nuclear trade, some German companies exported equipment to Iran's Bushehr atomic reactor on the Persian Gulf.

The move comes amid warnings by Germany's domestic intelligence services of a new spying offensive in the country by foreign secret services, including from Iran.

In an interview with German weekly Die Zeit, Hartwig Möller, head of the regional intelligence agency in the western state of North-Rhine Westphalia, said the Iranian secret service was intensively trying to get access to high-tech construction plans in the state in order to get information about military technology.

"It's all about getting know-how for the nuclear program," Möller said.

On Thursday, however a report by the IAEA, the UN nuclear watchdog agency, obtained by some news agencies, said Iran's nuclear work was far below the industrial level vaunted by Tehran in April.

Iran struck a deal with the International Atomic Energy Agency on Aug. 21 to answer questions about the nature of its program which Iran says is aimed purely at electricity production.

"The work plan is a significant step forward," said the IAEA report, but it added resolving current issues was not enough to give Iran's nuclear work a clean bill of health.

Germany has expanded an inquiry into illegal exports of parts for a nuclear power station in Iran. In defiance of a ban on nuclear trade, German firms exported equipment to the Bushehr atomic reactor on the Persian Gulf. (12.07.2007)

In a surprise meeting in Berlin, Germany's foreign minister met privately with Iran's chief nuclear negotiator. But western hopes for progress were met with intransigence by Iran. (06.06.2007)

The world's first trial of an alleged member of the A.Q. Khan global nuclear mafia opens in Mannheim Friday. It draws unwelcome attention to German firms' roles in the illegal export of nuclear technology. (17.03.2006)