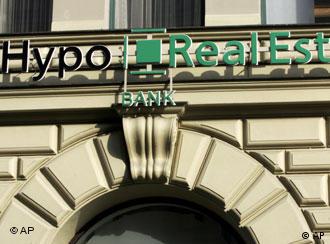 The bail out came the same day as Britain nationalized lender Bradford & Bingley (B&B) and a day after three European governments took stakes in Belgian-Dutch insurance and banking group Fortis, underlining that the financial crisis has spread well beyond the United States.

The German Finance Ministry in Berlin said it has provided HRE guarantees for an emergency credit line totalling 35 billion euros ($50 billion). The ministry added that it had no intention of nationalizing the lender.

A spokesman said the commitment was needed so that banks could bail out HRE, but the actual losses were not that high.

Sources said the commitment could potentially strain Chancellor Angela Merkel's federal budget. Germany's parliament would have to vote on the bailout package. HRE is the first major German casualty of the current worldwide financial crisis.

HRE said in Munich that a consortium of banks came to its rescue overnight as it faced a refinancing squeeze, extending credit to tide over the problems. HRE did not name the banks or disclose the size of the bailout.

As trading began on the Frankfurt Stock Exchange, HRE shares plunged 63 percent to 4.95 euros, dragging down other banks.

HRE had earlier been in urgent talks with German banking regulator BaFin and the Finance Ministry seeking a solution.

Germany's second-biggest commercial-property lender, a blue chip among the 30 top companies in the DAX stock index, had fallen victim to speculation by its Dublin-based unit Depfa, which specializes in loans to local governments in Germany.

Depfa had pursued long-term projects with heavy loans and generally ensured refinancing only at the last minute. It was caught short when it could not raise sufficient short-term money. 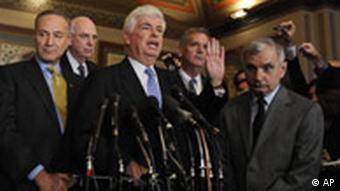 The US Senate Banking Committee will decide on the plan

HRE, which also lends money for commercial and industrial property, said it had entered into talks with the banks "in response to the extremely challenging conditions on the international money markets following the Lehman collapse and other market disruptions."

Commerzbank, Germany's number-two bank, said it had already secured all the refinancing it needed this year and had no desire to take over HRE. Commerzbank stock dipped up to 25 percent Monday before clawing back some ground.

Markets plunge as world waits for US plan approval

Meanwhile, global stock markets tumbled as the US Congress was to vote on a multi-billion dollar bailout deal.

US lawmakers agreed over the weekend to a $700-billion (479-billion-euro) bailout for debt-stricken Wall Street banks and sent the legislation aiming to stem the US financial crisis for Congress to start voting on Monday.

Meanwhile, there were still doubts about the proposed US financial rescue package, which needs to be approved by Congress and offers no guarantee of an end to the credit crunch that has ravaged global markets, dealers said.

"In our view, while the 'bailout plan' reduces the risk of a systemic collapse, many downside risks remain -- not least those related to a protracted slowdown in the global economy," Barclays Capital analyst David Woo told reporters. "In addition ... the financial market turbulence is seriously affecting the European financial system."

Woo added: "The weakness in equities ... suggests the market is pessimistic about the likely effectiveness of the (US) Treasury's plan."

The US deal, announced just hours before Asian markets opened, is designed to mop up toxic debts from struggling banks and prevent further financial chaos that could tip the world's largest economy into recession.

The unprecedented US bailout would be the largest government economic intervention since the Great Depression of the 1930s, and aims to shore up an economy in the face of a severe housing slump.

US Treasury Secretary Henry Paulson said the package "gives us the flexibility to unclog our financial markets (and) increase the ability of our financial institutions to deliver the credit that will help create jobs." 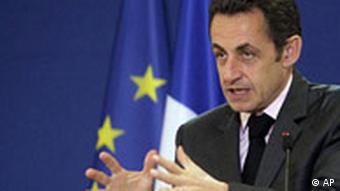 Sarkozy wants to insure the safety of France's banks

Also on Monday, French President Nicolas Sarkozy said he will meet with the chief executives of leading French banks and insurance companies to discuss the global financial crisis on Tuesday.

The meeting at the Elysee presidential palace is to "review the situation of financial institutions and the credit level of households and businesses," said a statement from the presidency on Monday.

Sarkozy warned in a major address last week that France would not be spared from the turmoil unleashed by the US banking crisis.

As Washington prepares to vote on its massive bailout plan, the European Central Bank gave the green light to a rapid nationalization of the Benelux financial group Fortis in a bid to save one of Europe's top 20 banks. (29.09.2008)

The British government is to nationalize mortgage lender Bradford & Bingley (B&B), the second bank this year to be taken into public ownership. (29.09.2008)