Germany and Russia Honor WWII Losses | Europe | News and current affairs from around the continent | DW | 06.05.2005

Sixty years after World War II, Russia and Germany have joined hands to honor the victims. The countries' leaders said in a joint interview that Germany was responsible for the war, adding that it also suffered greatly. 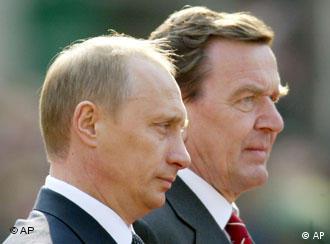 Schröder will meet Putin in Moscow to commemorate WWII's end

"Even if our generation is not in itself guilty (for WWII) we bear the responsibility for all our history," German Chancellor Gerhard Schröder said in the joint interview with Russian President Vladimir Putin, which appeared in the German daily Bild on Friday.

"Germany caused and started one of the worst wars in the history of humanity," he said. Schröder said Germans had suffered during and after the war, the end of which meant "the misery of refugees and a new lack of freedom" in the country.

Putin acknowledged German suffering too. "Of course German civilians suffered but this was neither the Soviet Union's nor the Red Army's fault. They didn't start the war," he said. "The German people were in many ways victims of a lack of responsibility on behalf of their politicians at that time. They were poisoned by the ideology of National Socialism and led into carnage," said Putin. "For millions of ordinary Germans this military adventure became a personal tragedy."

Putin used the bombing of Dresden, which was carried out by British and American air forces and led to an estimated civilian death toll of 35,000, to illustrate his point. "Even today I can't begin to comprehend just why Dresden was destroyed. If you look at it in terms of military strategy there was no need for it at the time," said Putin.

The statue of German religious reformer Martin Luther in front of the ruins of the Frauenkirche, or Church of our Lady, in Dresden, in a March 1967 picture and a similar view of the statue in front of the restored building, in Feb. 2005.

The German chancellor is one of some 50 world leaders due in Moscow for the May 9 celebrations of the 60th anniversary of the end of World War II. The two leaders, who know each other well, expressed satisfaction with current state of relations between Russia and

"If you consider the horror of the war, the reconciliation between Germany and Russia is a miracle," said Schröder.

"Both our peoples, Russian and German, have gone through a great deal of drama in their histories. I believe those experiences have made us all the wiser," said Putin, who concluded that "the historic reconciliation between Russians and Germans has been achieved."

On Sunday, a formal Liberation Day ceremony commemorating the victory over Nazi Germany on May 8, 1945 will take place in Berlin. Germany's two chambers of parliament will also convene a special session in the same Reichstag building that was once the symbol of Adolf Hitler's National Socialist dictatorship. All around Berlin's Brandenburg Gate, adjacent to the Reichstag building, different events throughout the weekend will honor those who suffered under Nazi tyranny.

German President, Horst Köhler, who will hold the official address at the ceremonies in the Reichstag on Sunday, also reminded today's generation to remember the role of the United States. It gave Europe so much -- the lives of its sons, and decades of involvement to ensure liberty, democracy and human rights, he said.

A new exhibition in Moscow marking the 60th anniversary of the end of WWII has reignited a nagging argument between Germany and Russia over looted art. (April 29, 2005)

Dresden has become a synonym for World War II aerial warfare. The destruction of the city on Feb. 13, 1945 signifies both horror and a warning, DW's Uta Thofern writes. (Feb. 22, 2005)

The Killing Machine Turns on Its Own