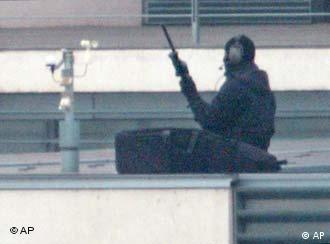 After the plot was foiled, police increased Allawi's security detail

One of the three men, identified only as Ata R., who was arrested in the southern city of Stuttgart, was suspected of being the ringleader of the plot and a leading member of the Ansar al-Islam group, which is closely linked to Osama bin Laden's al-Qaeda network.

Federal prosecutor Kay Nehm said Ata R., who is 31, was also charged with raising money to fund the activities of Ansar al-Islam in Iraq and Iran. The other two men, Mazen H., 23, and Rafik Y., 31, was also accused of belonging to Ansar al-Islam.

Nehm said that, at the time of their arrest in December 2004, tapped phone conversations between alleged Ansar al-Islam members in Germany "included increasing clues that an attack was being planned."

"The comments led us to believe something was being planned against the Iraqi prime minister," Nehm said, adding that the "particularly hectic" conversations prompted the authorities to carry out raids across Germany. 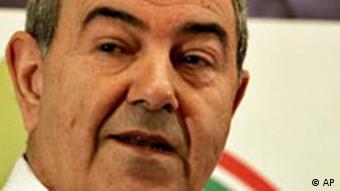 Rafik Y. called the other two men to get their go-ahead to attempt to assassinate then-Prime Minister Allawi during his visit to Berlin on Dec. 2 and 3, the prosecutor's office said.

Ata R. and Mazen H. gave him their approval and "offered him financial support, Nehm's office said. Rafik Y. then went to check out a Deutsche Bank office in central Berlin, where Allawi was set to have a meeting the following day, according to Reuters.

All three men were arrested the same night.

The prosecutor's office said Ata R. was the senior-most member of Ansar al-Islam in Germany.

"He was informed of attacks and plans for attacks ... He carried out a central steering and coordinating function both in Germany and other European countries. In addition, he was entrusted with recruiting new members and potential suicide attackers," the office said.

"His responsibilities included collecting and sending money for Ansar al-Islam to Iraq and Iran, as well as procuring money, when instructed, for certain terrorist enterprises and activities of the organization."

Ansar al-Islam has claimed responsibility for attacks in Iraq.

Arrest warrants have been issued for three Iraqis suspected of planning to attack visiting Iraqi Prime Minister Ayad Allawi in Berlin. German police had already traveled to Norway to question the founder of their group. (Dec. 5, 2005)