Germany: A Danube Tradition Lives On in Ulm

In early times, navigation on the Danube occupied an important position in the commercial life of the city of Ulm. Today, though, the river's small barges are used for a unique and traditional ride down the Danube. 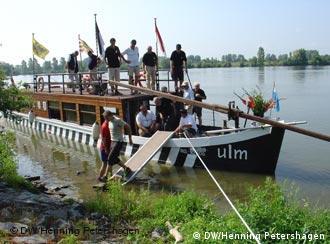 The "Ulmer Schachtel" gets ready to push off

The Danube waters have seen countless battles and wars, but also hold a wealth of culture and tradition. One of these customs originates in Ulm, the first major city that the Danube flows through in Germany.

Every year, about 30 men set out to sail downstream in a small, historic merchant's vessel called the Ulmer Schachtel -- or "box of Ulm." Sometimes they travel all the way to the Black Sea.

It's a century-old tradition involving strict oaths. What happens on the boat stays on the boat. That includes any talk of the initiation ceremonies and rituals. And there's a long list of regulations. Getting to the ship just one minute late will cost you and mobile phones are strictly forbidden.

The trip is also "men only" -- women are not allowed on board. But ophthalmologist Wolfgang Haupt, who went on the tour this year, isn't fazed about that rule.

"I think it wouldn't work with women," Haupt says.

The cruise for the bourgeois is a privilege

The doctors, lawyers and entrepreneurs on the trip have to put up with each other for more than a week on an old, wooden houseboat, which is only 10 meters long and fairly narrow. Having their wives along would make it even more of a challenge. Plus they need to focus on the task at hand, Wolf Dieter Hepach says. 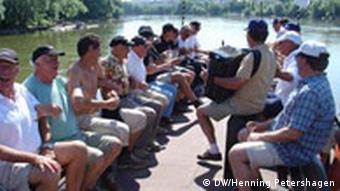 There's no lack of a good time onboard

"The tradition goes back to the Middle Ages when Ulm merchants sailed down the Danube," Hepach says. "Today, we go down and visit friends on the Danube and many of us have been doing this for 20 or 30 years."

Historically, these merchants, who poled their way down the Danube, couldn't compete with the transportation of goods by rail, and made their last trip in 1897. Only 10 years later, a group of historians resurrected the idea, as a type of cruise for the bourgeois.

If you're from Ulm, it's a privilege to be invited along.

A road to exploring Eastern Europe

The Danube was once a frontier of the Roman Empire and today makes up the borders of 10 countries. During the 20th century, it saw more brutality than almost any other river in the world: two World Wars, the Holocaust and widespread ethnic violence in the former Yugoslavia.

But Haupt says that the Danube is now increasingly about peace and friendship. 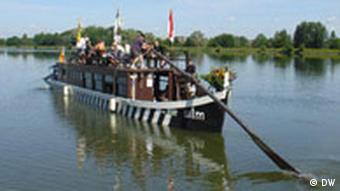 "The first trips that I did were when the Iron Curtain was still in existence and at that time, people were very desperate to have contact with western people, to hear what life was about in those countries," Haupt says.

Now, it's the other way round. There's a growing hunger for information about the new eastern European states -- and this is where this international waterway comes into play, according to Hepach.

"One of the most interesting reasons that we sail down the Danube is that we meet people, that we talk about the problems, that we show the world that the Danube is connecting all these states," Hepach says.

Moving towards a collective European identity

The serious background is what makes the journey significant, besides being a lot of fun. You could say these men are pioneers of a collective European identity.

"Going down the Danube River is very important for our European feeling that we are having now," Haupt says. "I had the opportunity to go down to the Black Sea last year, which was very interesting because we were traveling through a lot of countries that are going to join the European Union soon: Bulgaria, Romania and, of course, lots of little states that are created from the former Yugoslavia. So, it was very interesting to meet people there to see the different cultures."

So could he determine a similar or collective European feeling or identity?

"Not yet, but I think we are coming to it," Haupt says.

In the meantime, these men have got all the culture they need on this tour: beautiful churches, monasteries, castles and exhibitions. And if they run out of that, there's more than enough alcohol on board to pass the time.

This association organizes the traditional trips down the Danube (German only)