Imagine tucking a book in a tree or leaving it at a bus stop for someone to find and take home to read -- that's exactly what thousands of "bookcrossers" around the world do. The trend's catching on in Germany too. 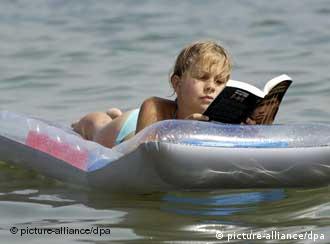 Australian Kate Hairsine stumbled upon a book by Germany's master poet Johann Wolfgang von Goethe in the strangest of places. It was wrapped in plastic and dangling from a statue above a fountain in the middle of Karlsruhe, Germany, where she lives.

"I kicked off my shoes and waded into the water to fetch it. I knew it must be a BookCrossing book!" she said.

A quirky way for book lovers to both get their hands on titles and share favorite books with others, BookCrossing has grown into a global phenomenon.

Hairsine first heard about it in Australia.

"I desperately wanted to find a book because I felt like I was missing out on what I think is a great cultural experience of finding a random book to read," she said. "Books are meant to be read and shared and not to collect dust on a bookshelf."

The thrill of discovering a book 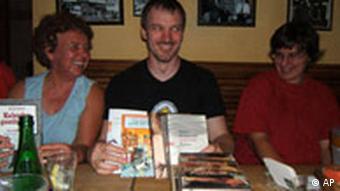 BookCrossers "release" books into the wild. They place books in public places to be found and read by someone else. Stickers on the book covers announce that it is a BookCrossing book and also display an identification number.

Optimally, a book finder takes the book home, logs on to the BookCrossing site and enters the identification number along with a journal entry about how he or she found the book.

The "book releaser" gets an e-mail notification of the entry and can thus keep track of the travels the book makes. Book releasers and book finders can also converse online using nicknames.

Whether it's stumbling upon a book at an "official BookCrossing zone" -- generally, on shelves in cafés -- or finding one in the wild, there's little doubt that the discovery is the most thrilling part of the phenomenon.

"You have to love adventures to do it. Finding a BookCrossing book is like finding a message in a bottle," said Susanne Weigand, who discovered the movement on the Internet.

"I liked the idea so much, I started clearing off my bookshelves and releasing the books right away," she said.

Once upon a time… 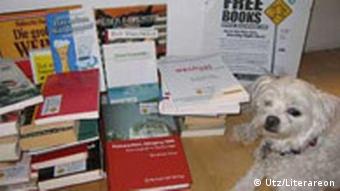 First founded in the United States in 2001, BookCrossing has grown around the world and includes nearly half a million members and around 3 million registered books. Last year, the BookCrossing.com site won two "Webby Awards" for best community and best networking site.

Yet the movement in Germany and Europe has been slower in gaining ground. 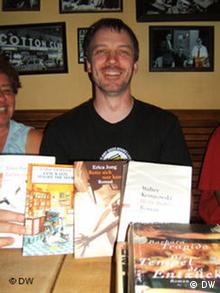 Ferrari has translated the American site texts into German and maintains the German site because he says "a lot of older Germans don't speak English."

"With the German support site, more and more Germans are participating as a result," he said. He has also created a general European support site, hoping to augment BookCrossing instructions in various European languages.

As of this spring, there were over 30,000 registered German BookCrossers, though only about 20 percent are really active. Some meet regularly in cafés and at annual BookCrossing conventions.

Find a book, pick it up…

For many, placing a book strategically in the unlikeliest of places can be fun too.

"Sometimes when I release a book, I wait around until someone finds it so that I can see the smile spread across their faces," said BookCrosser Alexander Esser. 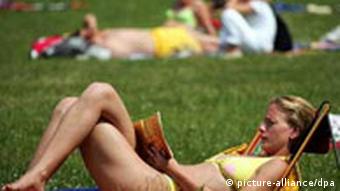 The element of surprise and adventure involved is what drives Ferrari too.

"Once, I released a book near the Cologne City Hall and it turned up three weeks later in Poland," he said.

Ferrari is admittedly an addict. Having released around 1,400 books in all, his record stands at nearly 300 in one day in two major cities.

Some critics believe BookCrossing could diminish sales for publishers since people are sharing books rather than buying them. Yet Herbert Utz, founder of Utz Verlag in Munich, disagreed.

"Not only is BookCrossing fun, it's a good way of promoting lesser-known authors," he said.

And, said Esser: "I've discovered books on BookCrossing that I never would have come across alone," he said. "I now buy two: one for myself and one to release in 'the wild' through BookCrossing." 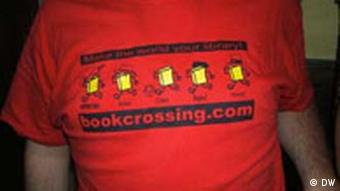 Crossers log on to help "make the world a library"

Goldmann Verlag, a subsidiary of Random House, released 1,000 copies of the German translation of "Paranoia," by Marc Costello.

"We thought there were some parallels between the fear of being followed in that novel and the whole BookCrossing adventure," said Claudia Hanssen, spokeswoman for Goldmann. "BookCrossing is a wonderful platform for discussing books."

Ferrari, however, lamented that book finders register only about 15 percent of the books released. He hopes more people will participate since the goal is to "make the whole world a library." Besides, he said, "we want to continue the fun."

A long-standing trade battle over the right to sell English-language books in Europe has reignited between British and American publishers, with the UK feeling the threat of cheaper US editions at its front door. (June 22, 2006)

The key to the success of the Leipzig Book Fair is that there is something for everyone, from works by budding novelists to world renowned authors, comic books and audio books and much more. (Mar. 15, 2006)