Most national anthems are at least a little politically incorrect by today's standards, and Germany's is no worse than other countries'. So why does it still send a chill down the spine? 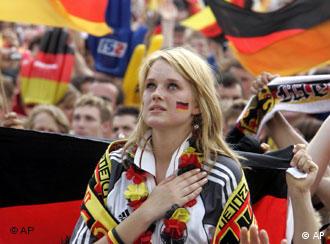 Singing it loud, singing it proud

"Do you hum it, or do you sing it?" wondered Berlin newspaper BZ as the World Cup kicked off two weeks ago -- and obligingly printed the lyrics for anyone who didn't know the words. In Germany, that's a lot of people. Unlike just about everyone else in the world, no one in this country learns their national anthem at their mother's knee.

In fact, "Das Deutschlandlied" is relatively harmless -- one of the world's only national anthems by a renowned composer and little more than a celebration of "unity, law and freedom." Compare that to the French "La Marseillaise" -- "March, march/let impure blood/Water our furrows!" -- or lines such as "Their blood has wiped out their foul footsteps' pollution" from "the Star Spangled Banner," and it looks positively mellow.

But for obvious reasons, Germans still balk at references to the Fatherland, while the French have no such qualms. 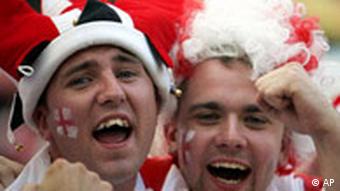 Sixty years after World War Two, impassioned expressions of patriotic zeal are still largely taboo in Germany. Those emotionally charged moments ahead of football games see other teams visibly swelling with pride as their fans bellow along to the "Inno di Mameli" and "God Save the Queen." But to the Germans, the experience has always been inevitably tainted by a nagging awareness that their country long ago forfeited its right to national pride.

But in recent weeks, World Cup fever has given rise to a burgeoning sense that maybe it's OK to be German and proud of it after all. The sight of the German team standing in the Munich stadium, their arms around one another as "Das Deutschlandlied" played, was a emotional moment for many watching.

Against the backdrop of this "positive patriotism," the education and sciences sector trade union (GEW) provoked outrage this week when it proposed replacing the hymn's text with lyrics penned by Bertold Brecht in the post-war years. Why shouldn't Germans belt out their traditional anthem as heartily as the Dutch sing the "Wilhelmus" and the Swedes "Du gamla, Du fria"?

After all, many argue that all that's needed to demystify the German national anthem is a better look at the context it was written in.

The vagaries of history

It was on August 26, 1841, that the poet August Heinrich Hoffmann von Fallersleben (1798 - 1874) wrote "Das Deutschlandlied" while in exile on Helgoland, which then belonged to England. 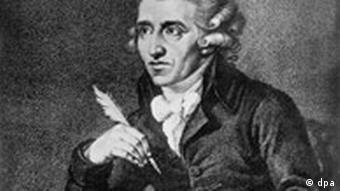 The music had been written over forty years ealier by Austrian composer Joseph Haydn (1732 - 1809), and was previously set off by Leopol Haschka lyrics that paid tribute to the Austro-Hungarian empire.

Writing at a time when a unified Germany still did not exist, Fallersleben, a liberal professor of German literature, would never have guessed how sinister the first lines "Germany, Germany above all/Above everything in the world" would sound to later generations. A fervent nationalist, his intention was to rally the people together to form a unified Germany -- a nation "above" the separate states of Prussia, Austria, Saxony and more than 30 others, "from the Maas to the Memel/From the Etsch to the Belt."

Tarred by the Nazi brush

In 1922, the first president of the Weimar Republic, Friedrich Ebert, officially introduced "Das Deutschlandlied" as the national anthem, complete with an unofficial "fourth stanza" dealing with the postwar situation which was later forgotten.

Its fall from grace came after the Nazis took power. During the Third Reich, the first stanza was used heavily, unlike the second and especially the third, which did not fit the Nazi agenda. In their place was sung the "Horst Wessel Lied," a song penned by an SA stormtrooper believed to have been killed in a confrontation with Communists and subsequently considered a martyr by his fellow Nazis.

From then on, the anthem was tarred with the Nazi brush, and after the end of World War II, the newly founded Federal Republic of Germany was at a loss for what to do with the question of a national anthem.

It wasn't until 1952 that then Chancellor Konrad Adenauer asked President Theodor Heuss to "designate the song by Hoffmann and Haydn the national anthem. At state functions the third verse should be sung." 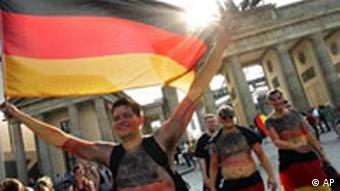 Ever since, Germans have been singing the third stanza as the official anthem but with a marked lack of gusto.

Now, slowly but surely, "Das Deutschlandlied" is being reclaimed, and the opening of the World Cup might, in retrospect, mark something of a turning point. It seems that football has done what politics could never do -- give a voice to a generation to whom patriotism is not a dirty word.

The self-confidence shown by Germans at the World Cup is an expression of a new and healthy patriotism, according to several politicians. The Catholic Church has welcomed a "commitment to our country." (June 18, 2006)

Singing From the Same Hymn Sheet but in a Different Language

German politician Hans-Christian Ströbele has a novel idea for bringing Germany's diverse cultures together: foreign language national anthems. He wants a Turkish version of the German hymn to promote integration. (May 3, 2006)

New German Pride is Nothing to Hide

DW-WORLD.DE's readers praised Germany's newly found sense of patriotism, thanks to the World Cup. But they were less supportive of Germany's continued resistance to banning smoking in public places. (June 22, 2006)