Germans consumed over 23 billion untaxed cigarettes in 2011, more than ever before. In a number of eastern German cities, every second cigarette smoked generated no tax revenue for the state. 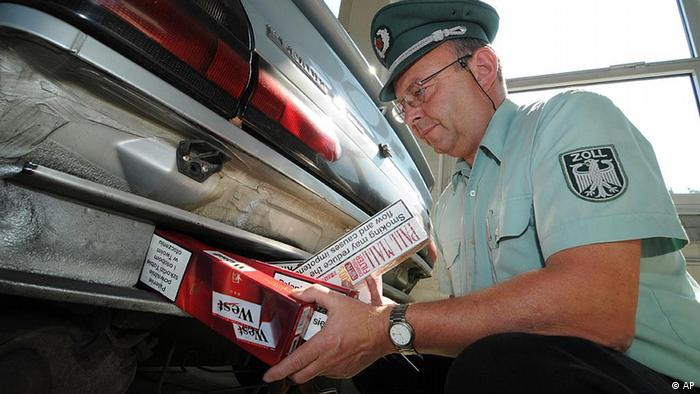 Germans smokers consumed a record 23.5 billion untaxed cigarettes in 2011, the German Cigarette Association (DZV) announced on Wednesday. That was 1.5 billion more than in the previous year. It means that every fifth cigarette sold entered the country illegally.

In cities close to Germany's eastern European neighbors the situation was even more dramatic. Every second cigarette smoked there in 2011 was untaxed, the association reported.

Altogether, the German state lost 5.5 billion euros ($7.25 billion) in tax revenue due to the illegal selling and consumption of untaxed packets.

"Cigarette smuggling is no trivial offense, but organized crime," the DZV's Managing Director Marianne Tritz said in a statement in Berlin. "It's a serious problem which is getting worse and worse."

The DZV assumes that smugglers were concentrating on moving cigarettes around within the EU, now that controls at the EU's external border have been tightened. The illegal transfer of untaxed cigarettes within the European Union was identified as a problem that would be hard to resolve.

Customs not to blame

"Customs officials are doing a good job," said DZV chairman and General Director of cigarette manufacturer Reemtsma, Marcus T.R. Schmidt, in a statement. "But their job is hampered by insufficient resources and 1,000 kilometers of open borders towards the east," Schmidt added.

He urged a closer cooperation between customs officials, Europol and German federal police officers. Schmidt also insisted on a faster exchange of information between state authorities and industry to get on top of the problem.

Tobacco industry officials attributed the sharp rise in the consumption of untaxed cigarettes in Germany in part to a series of tax hikes on tobacco in recent years. Only in January of this year, cigarette packet prices went up again by up to 10 cents.

Accordingly, sales of taxed cigarettes in Germany have fallen to 83 billion annually, down from 145 billion ten years ago.