The simplified extradition regulations for suspected criminals within the EU have been criticized ever since they came into effect. The highest court in Germany is now turning its attention to it. 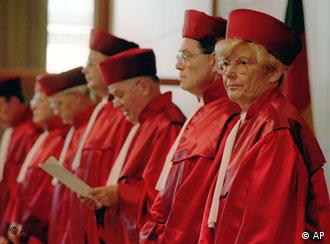 German judges are set to decide on Europe-wide extraditions

Effective and swift cooperation -- that's what's always been demanded on the legal level in Europe. Towards that end, the European warrant arrest was introduced in the bloc early last year. It aims to simplify extradition procedures for suspected criminals within the European Union.

But, not many EU members are really happy about it, with many preferring to retain elements of the old procedure.

That may seem odd given that the old regulation was rather cumbersome. For instance, earlier the suspected crime had to be punishable and allowed to be pursued by the law both in the home country of the suspected criminal as well as in the nation that he was to be extradited to. 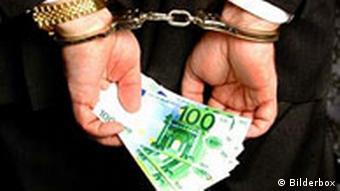 Money laundering and counterfeiting are included on the so-called "positive list of criminal areas."

The new regulation has been significantly simplified in this regard: when the suspected crime is included on a so-called "positive list of criminal areas," then the criminal can be extradited.

The problem however is that the list is too vague. "For example: what exactly does sabotage mean?" said Helmut Satzger, professor for European Criminal Law at the University of Munich. "We don't have a provision on the books to deal with sabotage in German law," Satzger said. The same is true for racism and xenophobia.

Criticism is growing in Germany about the European arrest warrant and its apparent contradictions and the German constitution court in Karlsruhe is set to grapple with the topic in detail for the first time this week.

In many other cases, the crime must be punishable in both states much as was the case earlier. Despite that, there are huge differences in various EU states regarding the severity of the crime. The differing legal systems in the EU member states have prompted concerns among German lawyers' groups, law professors and lawyers. How for instance, they ask, can a ruling of Greek courts be accepted in Germany when there are completely different laws here?

These worries are shared by other EU members states too and some have reacted. "For example there are states like Denmark who haven't translated the new regulations in binding law," said Satzger. Others such as France have reserved the right to examine the dual criminality principle contained in the European arrest warrant. 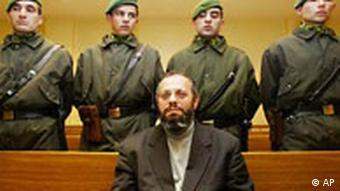 Islamic militant Metin Kaplan was extradited to Turkey by Germany after a long-drawn out legal battle. He was extradited on charges of treason for allegedly masterminding a failed plot to crash an airplane into the mausoleum of the founder of secular Turkey.

But, it's not just differing laws in EU states that have prompted worries. Even bans on extradition of criminals are problematic. The EU so far recognizes only three hindrances to extradition: the already existing punishment of the criminal in his home country, if he's not criminally liable due to underage, or an amnesty. As against that member states can no longer refuse to surrender to another member state their own citizens on the ground that they are nationals.

No appeal in the home country possible

"For example, if Lithuania issued such an arrest warrant against a German then Germany must surrender its national to Lithuania," said Satzger. That means, that the German national could not protest that the crime isn't punishable in Germany. "If the suspected criminal doesn't know Lithuania, if he has no idea of the Lithuanian legal system and if he also doesn't exactly know for example how the mandatory defense counsel would work, then we're dealing with certain problems here," said Satzger.

Long before the European warrant arrest actually too effect, a few German constitutional court judges had strongly criticized the procedure. "The German Constitutional Court has undertaken a big task in the respect: the judges are using the arrest warrant to answer some very fundamental questions about the relationship between European law and national law," said Satzger.

He added that most member states had accepted that European law would override national constitutional law. But, Germany's not convinced.

A year after the Madrid bombings, international leaders arrive in the city to discuss the on-going war on terror. The discussions may force the Europeans to take a long, hard look at their efforts since March 11, 2004. (March 8, 2005)

The Trouble With Nailing Terror Suspects

Another terror trial without a hard conviction this week has illustrated once more the difficulties the German judiciary has in putting terror suspects behind bars. But some experts say prosecutors are learning. (April 8, 2005)