Two students have re-opened a discussion on revamping Germany's mandatory military service by proposing a reduced term and other reforms that have been praised by the parliament's point person for the military. 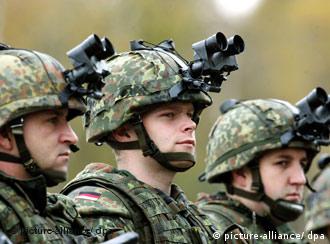 "The restructuring of the Germany military service is long overdue"

The proposal to reform and shorten the term of Germany's mandatory military service for young men is getting the attention of Reinhold Robbe, a Social Democrat and the parliament's military commissioner.

The authors of the study, Andreas Ahammer, 24 and Stephan Nachtigall, 25, wrote in the local newspaper Neue Osnabruecker Zeitung that the current term of nine months should be reduced to six months.

Ahammer and Nachigall, who are both university students, formulated a “Five plus One” model which would consist of three months basic training, two months of learning how to manage a crisis situation and one month devoted to acquiring advanced professional skills.

The minimum educational requirement of recruits would be a basic high school diploma.

“This is especially crucial for strengthening the capabilities of the military when it comes to defense in critical situations,” said Robbe, who obtained a copy of the 87-page study cited in the newspaper.

Robbe had praised the study as one “very much worth contemplating.“

“These two young authors have opened up an unconventional and constructive discussion to a necessary debate about the future of military conscription in Germany,” he said. 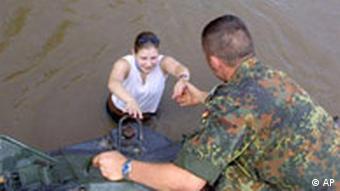 The Bundeswehr is also deployed for civilian purposes

But Bernhard Gertz, who is head of the German Armed Forces Association (DBwV), a lobby group consisting of former Bundeswehr soldiers, told the Associated Press that the proposal was a private initiative of Ahammer and Nachtigall, who are both members of the DBwV's executive board.

"They have presented their paper to us, but it is not ready for public consumption,” Gertz said.

He characterized the document as only a basis for a preliminary discussion and opposed its public release. Still the young men decided to release the study on their own.

Ahammer and Nachtigall have spent months campaigning and gathering 25,000 signatures for a petition to increase the basic pay of Bundeswehr soldiers, an initiative that was recently passed by the German parliament.

“The restructuring of the German military service is long overdue,” they wrote in the newspaper, pointing out the savings to the national treasury if conscription was shortened to only half a year.

They estimated a cost savings of 57 million euros ($88.6 million) based on a monthly remuneration of 300 euros per month for each soldier. The shortened service also opens up the possibility of conscripting 95,000 young men instead of only 75,000, which would be the basis of greater fairness in recruitment procedures, according to the two authors.

Furthermore, massive events such as the G-8 summit that German Chancellor Angela Merkel hosted on the Baltic coast at Heiligendamm last year as well as the 2006 World Cup soccer games in Germany demonstrate how well the armed forces could be deployed for modern, civilian purposes, they wrote.

A 21-year-old man has begun a hunger strike to protest his conscription into the army. The case throws the spotlight anew on Germany's conscription policy, which many view as unfair. (16.05.2008)