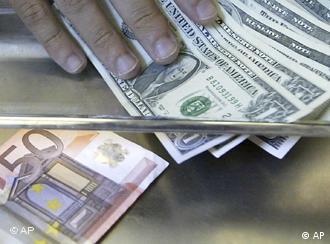 Lawmakers voted 408-144 in favor of the budget, which has provided for a slight increase in outlays for defense and economic assistance. Defense spending will go up to 29.45 billion euros, up from 28.39 billion in 2007. The Ministry for Economic Assistance, which is responsible for the distribution of Germany's overseas development aid, sees its share of the budget go up to 5.13 billion euros, an increase from 4.5 billion euros last year.

The biggest slice, accounting for about 30 percent of the overall budget, has been earmarked for labor and social affairs.

During the final day of the four-day debate, German Economics Minister Michael Glos appealed to the United States to slow down the dollar's slide as European exporters come under growing exchange-rate pressure.

Glos said Washington should not try to fix structural problems in the US economy by devaluing the dollar.

"If the resulting economic boom is not underpinned by structural adjustment in the US economy itself, but is achieved purely as the result of a weak currency, then the Americans have gotten a bad deal," he said.

Huge deficit spending has led to a free fall of the dollar, pushing the value of the euro to higher levels and was partly responsible for setting off turmoil in the world financial markets.

Earlier, German Finance Minister Peer Steinbrück said he did not expect the German economy to suffer too much from the current credit squeeze triggered by the US mortgage crisis.

EU exports elsewhere to offset slack in US

He told the Financial Times newspaper that he expected the German economy to perform well next year even if were to grow at a slower pace than 2007.

Steinbrück said domestic demand was picking up and exports would remain brisk, with demand from Russia, Eastern Europe and Asia offsetting a slowdown in US imports from the Euro zone.

Referring to the strength of the euro against the dollar, he acknowledged that it would have an effect on Germany, but said the stronger currency would curb the impact of higher oil prices, since crude is dollar-based.

"For us Europeans, we prefer a stronger euro to a weak one," he told the financial daily.

Germany has recorded a real budget surplus in the first half of the year for the first time since reunification, officials announced Thursday. A leading politician cautioned that the country's still struggling. (23.08.2007)

European aircraft maker Airbus faces a crisis of "life-threatening" proportions as a result of the rise of the euro against the dollar, company chief executive Thomas Enders told employees in Hamburg Thursday. (22.11.2007)

It was bad news for the US dollar Tuesday as the euro hit a record high, and the British pound reached a 26-year peak against the American currency. (10.07.2007)