German Weatherman Gets a Feline Surprise | Germany| News and in-depth reporting from Berlin and beyond | DW | 09.01.2009

German Weatherman Gets a Feline Surprise

In the good old days it wasn’t uncommon to see some pretty creative props employed by weathermen and women, but most of them were intentional and few of them were alive. 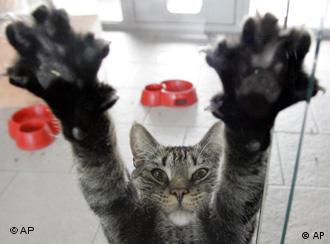 Cats across Germany are begging to audition as the weathercat's understudy

A cat became an unwitting co-star of Germany's leading meteorologist Joerg Kachelmann as he was giving the live weather report this week. The feline wandered onto the stage just and began rubbing up against the weatherman's leg and waving its tail in front of the camera.

Like a true professional, Kachelmann wasn't fazed by this surprise appearance. He simply reached down and picked the cat, whose name is Lupin, and finished his forecast without missing a beat.

"I don't know how he got into the studio," Kachelmann told Reuters news agency, adding Lupin belonged to a staffer who was out of town.

"I noticed him when he rubbed against my leg and thought people might wonder what was happening. I figured it would be easier to control the cat by picking him up. Cats get annoyed if they feel ignored. So I made sure he didn't feel ignored."

There is no news about whether or not the accidental “weathercat” will be making a repeat performance.

Men are From Mars, Women can Assemble IKEA Bookshelves

The head of the German division of the home products retailer, IKEA, says the company's male customers have a bad track record compared to its female clients when it comes to putting furniture together. (25.12.2008)

Though suffering from a Saint Nick shortage across the country, Germany’s sending wannabe Santa Clauses to boot camp to learn the ins and outs of being a visitor from the North Pole. (19.12.2008)

Pampered Pooches Get Their Own Five-Star Resort

The four-footed jet set can now enjoy wellness and undivided professional attention at Germany's first five-star hotel resort for dogs. Whether it's just for a day or for longer, those well-off pups can be pampered. (17.12.2008)